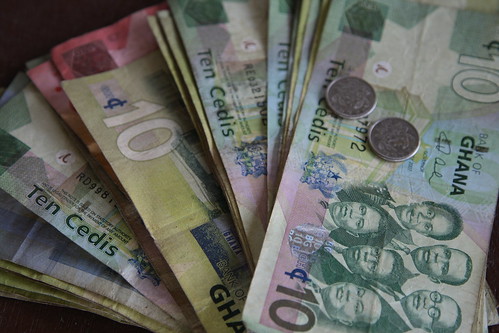 In Ghana, election year comes with many activities. Except for the political events, speeches and rallys, the economy sees many hikes and lows. What is happening is that projects in the pipeline suddenly need to be executed as a 4 year period comes to an end. On one hand, this is great news, new roads are finally completed, there is work for everyone and business is flourishing. The downside of this increase in expenditure is heightened inflation and a weakened cedi exchange rate.

In April, Ghana’s inflation was at a year high at 9,1 percent (up from 8,8 percent the month before), reports AF Reuters. This morning on BBC, a report describing Argentina’s financial situation seemed to echo what is happening in Ghana. Hotel rooms, school fees, real estate is all quoted in US dollars as the value of the local currecy shifts so often (downwards) that it is no point setting prices in it.  The exchange rate influences the inflation rate. Bank of Ghana in their Inflation Outlook Report (April 2012) states:

The cedi weakened against the US dollar as a result of high demand for foreign exchange. In the first quarter of

2012, the cedi depreciated by 8.3 per cent against the US dollar, compared to 2 per cent depreciation in the
same period of 2011.
The weakening of the local currency started in the last quarter of 2011 and was driven by several factors
including the growing demand for foreign exchange to support increased economic activity due to the expansion
of the economy. A second, more structural factor is the changing nature of the trade pattern which is gradually

shifting towards Asia, especially China, for which transactions are mostly conducted on cash basis. The

persistent depreciation of the cedi can have far reaching consequences on the inflation profile. A third factor
relates to external sector conditions, such as the euro zone crisis which have also instigated investor portfolio
outflows from the bond market in the latter part of 2011. There are also the speculative activities by foreign
exchange traders trying to profit from the depreciation of the currency while other market participants seek to
hedge against further depreciation thereby exacerbating the situation.

The effect on Ghanaians’ lives is immediately felt, as each week your salary can buy you less. Some goods such as cement is because of increased demand rising even quicker in price. A bag of cement that was 16 GHC in February is now 20-23 GHC! Just like in Argentina, there has been recent debate on if official numbers really capture the inflation “on the ground”. Dr Bawumia from the opposition has raised issues, the Ghana Statistical Survey has responded.  Regardless, this is a problem that Ghanaians carry into the upcoming election 2012.

It is a new year, but many things remain the same. Since some time, my little family has been preparing to relocate. After soon 5 years of renting, we believe we are now ready to purchase a house.

However, the housing market in Ghana (that I have covered earlier under the tag Housing in Ghana) is all other than transparent and easy to grasp, hence I thought I would share what I have learned in a blogging series.

But before I start my stories on renting, contracts, agents, real estate developers, plot purchasing, my dream house and other related topics, let me listen to you, my readers – what do you want to read about in connection to the Ghana housing market?

For you who like drooling over real estate here is a very special one from Ghana:

How about your own 27 acre paradise island?

Sandy beaches, safe swimming and fishing in Lake Volta, pleasure boat cruising, bird watching and both  “adventure and therapeutic” is promised by the excited seller.

I say “adventure and therapeutic” on a paradise island close to Ada Foah is exactly what I need for x-mas! If you buy this island, please remember where you read it first!