Third Time A Charm? Reporting from a #DayatDVLA

This year, my driver’s licence expired and needed to be renewed. I made my first visit to DVLA in April, payed the dues for the renewal, but did not get to complete the process. I left with a scribble on my application and used it until July when the scribble expired and the “capture machine” was restored. In July, I completed the application process and left with a temporary license. This week the temporary license expired, so I got on the dirt road to DVLA (see photo below) again. Here is my story.

When I entered, I was shown to room 7 by a man in a yellow very saying “Lion Security” (more on that later). The room has a number of desks and about half of them are covered with boxes with licenses marked with “February 2015, March 2015” and so on. I would guess there were a couple of thousand licenses there waiting for their owners. I asked if I could take a photo for the blog, but was asked not to. I was immediately told, “Oh, your license is not ready”. I was asked to sit down while my temporary license was extended.

Instead I walked past crowds of waiting people to the head of DVLA Tema, Mr. Osei-Bio’s office (see photo below) to get an update on the issues we discussed in July. The same issues I had filed complaints about to his predecessor in April. Mr. Osei-Bio looked tired and did not recognise me until I sat down and introduced myself. He then smiled and answered all my questions with patience. These were my issues:

-Lack of information, possible solutions I listed in my first complaint were:

– Security personnel instead of information staff. 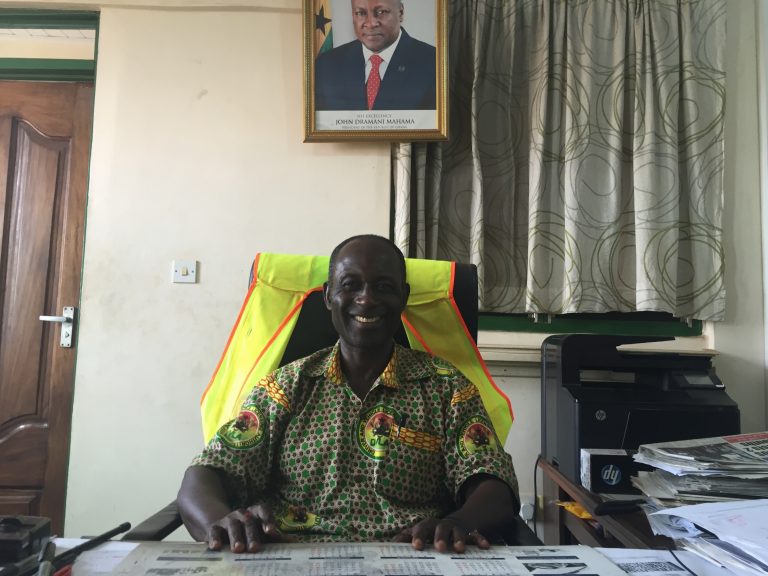 I was told all the printing is being done in Accra and is dealing with a two year backlog. This was confirmed when I later when to pick up my extended licence and was asked “When did you first apply? 2014?”. My friend Jacob that was mentioned in the April post also had had his temporary licence renewed since 2014. I again explained what a hassle that is to us drivers: having to spend several working days just to check on a license that we have all payed for, not having a valid ID (banks do not accept the Temporary license). I was told now the extension is not three months, but until the end of the year. By then, they believe the printing of the backlog of card will have been done. My extension reads 30/12/2016. However, why can the printing of licenses not be done in Tema ( and all the other DVLA districts) so the day that you come to renew your licence, you also leave with your new license? The cost for manpower involved in extending licenses for years and handling licenses must well exceed a few card printing machines? Add to that cost the productivity loss for all of us “coming and going” and being robbed of our legal identification. 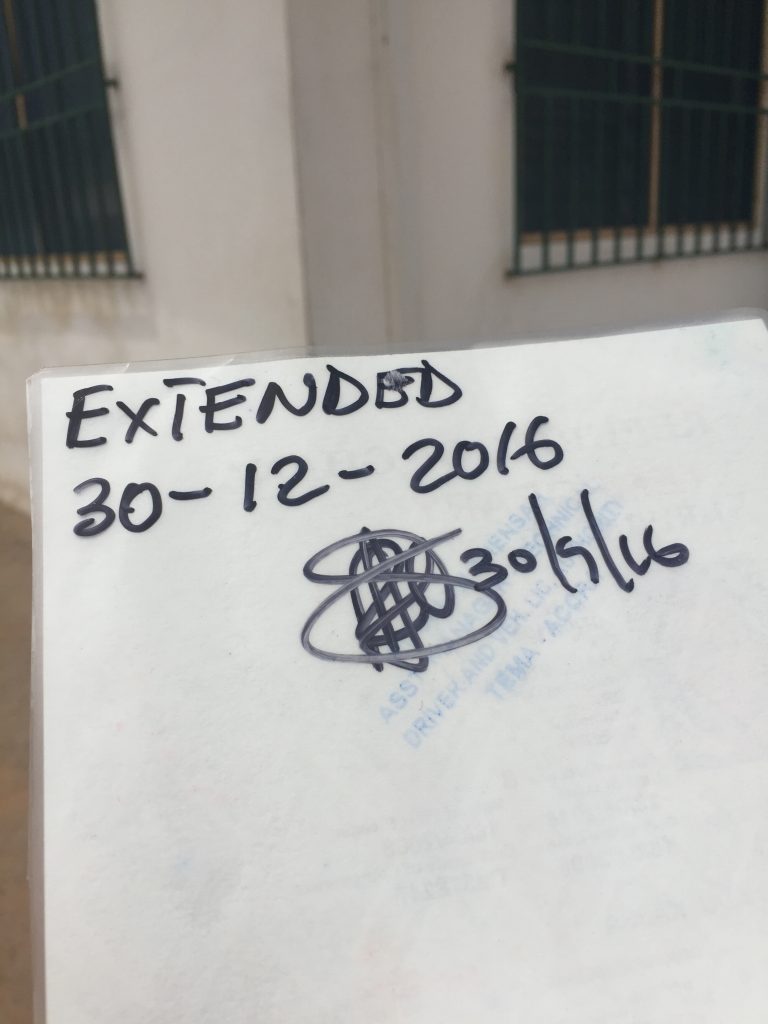 The lack of information was even greater this time. The electronic signboards were not working (see black screens on the building in the last photo). The audio message was off. No central reception had been created. Rather the “Customer Service Centre” at the gate was closed and replaced by two aggressive security men. No visual step-by-step instructions exist anywhere. However, I saw prices for services being posted on the wall, and I thought to myself: now that is an improvement from July. Exactly what I asked for! 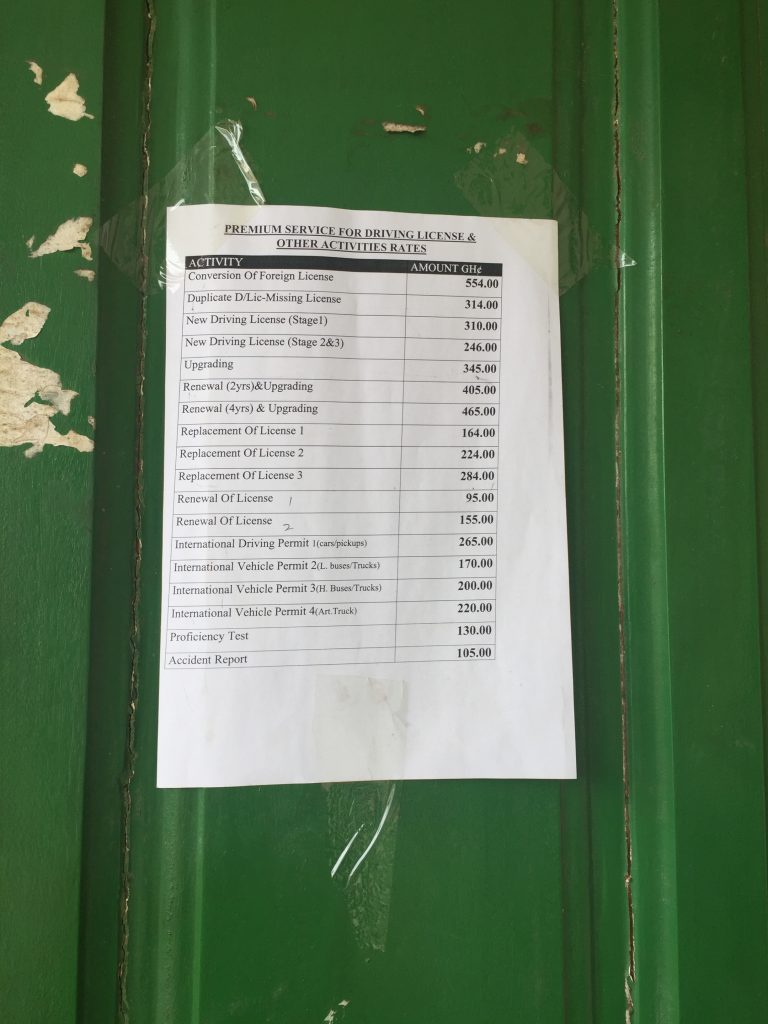 But it was not so. The prices on the wall is for a new initiative of “Premium service” where you supposedly get served quicker by DVLA. As the regular prices are not displayed anywhere, I can’t tell if it is a good deal though. (Also what is versions 1, 2, 3 for replacement of license?) Why create a premier service if you cannot perform the basic service? 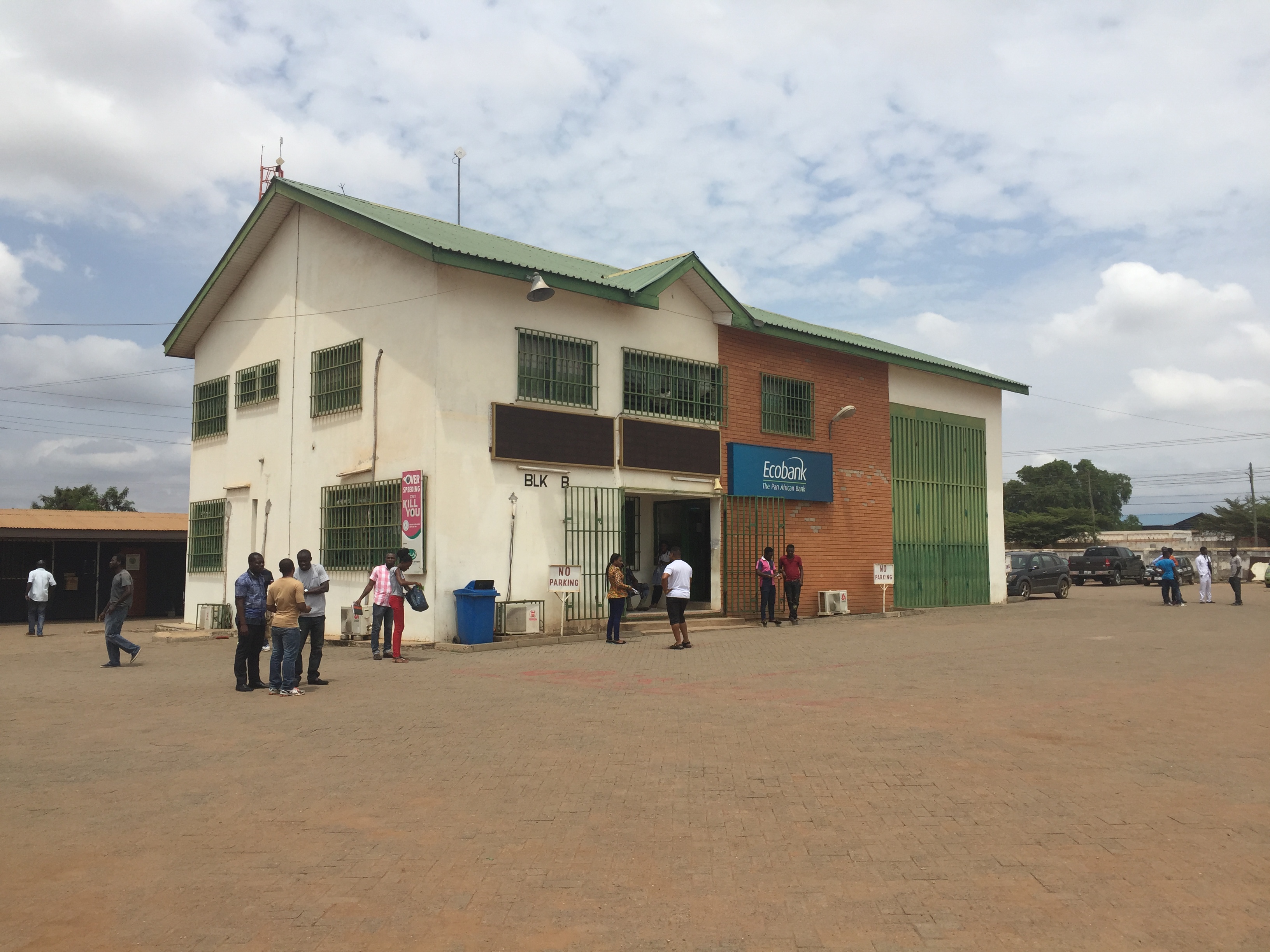 I told Mr. Osei-Bio that when DVLA does not paste information anywhere, see defunct electronic screens on the admin block on the photo above, they play us customers in the hands of connection men or the security guard I met when walking in. The security guards have been there for about a year and serve both as information givers and security. However, the onsite bank is guarded by a policeman with a weapon. I questioned why DVLA Tema need 6 security men on post? Mr. Osei-Bio said this is normal, all establishments need security. Perhaps, yes. But even more, do we not need information? To me, it seems that when drivers in and around Tema come back for the second-third-fourth-fifth time to get something they have payed for, they have every right to be angry and demand change. Is that why the security is really needed?

When I was leaving I wanted to record the speaker to prove there was no customer service announcement and also take a photo of the closed customer service unit. I had asked for permission to take photos by Mr. Osei-Bio when I was in his office and while he denied my request to take photos indoors, he said I could take photos “outside, on the premises”. My mistake was not asking security at the gate. Quickly they came up to my car and escalated the situation from me taking a photo and asking about the customer service announcement that was no more, to them screaming “Do you know there is security here” and “Who asked you, WHO ASKED YOU TO TAKE PHOTOS?” Their aggressiveness was uncomfortable and unnecessary and was not appeased by me saying I had a meeting with Mr Osei-Bio (“Mr. Osei-WHO?”) and had his approval. They forced me to park my car and walk back to the building and what for Mr. Osei-Bio to come. To me this buttresses my point above on an organization that cares more about protecting itself than being of assistance to its customers.

The only thing that keep see hopeful at this time is how well I was received by Mr. Osei-Bio (“You  help me to do my job better”, he said) and how much people around me at DVLA agree when I speak up and say: THIS IS NOT ACCEPTABLE. I urge every one of you who read this to “adopt” a government agency, liaise with its leaders, and demand better service.