Just like most other netizens and media consumers in Ghana, I have been following the issue of famous Ghanaian academic and writer Professor Ama Ata Aidoo’s walk out of an event where she was to be honoured. What happened on Saturday September 3rd was: Aidoo walks in, notices that the banner and the program has spelt one of her names wrongly. She walks out and while organisers beg her to return, she doesn’t.  Source and photo: Article on CitiFM. 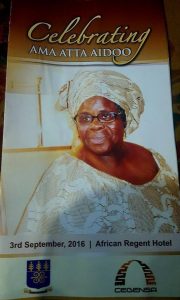 Aidoo’s daughter Kinna Likimani was the first one to report the issue on Twitter. Later she posted her tweets on Facebook as a post which was shared extensively. Full disclosure: I work with Kinna Likimani, respect her professionally, and like her a lot personally. Likimani wrote both about her mother’s relationship to Ghana and to being honoured. She explained:

“Ghanaians know how to do things right. We do.

What will not be happening is Ama Ata Aidoo enduring any bad treatment or anguish over honors or celebrations. No. Certainly not when folks like Korkor Amarteifio have set a standard.

Writers only ask to be read. That’s all.

My mother often quotes Efua Sutherland: “I was sitting my somewhere”. She lobbied for nothing, asked for nothing.

My mother is a highly sensitive person. The anguish would have followed her home and she would have wallowed for weeks.

She has done for Ghana and Ghana has responded with awards, honorary degrees, events. We thank all.

But at 76 years, Ama Ata Aidoo, after 60 years writing, publishing and teaching, will walk out.”

Then last week, Journalism professor Audrey Gadzekpo, wrote a compelling piece about this story from another point of view. Full disclosure: I have met prof Gadzekpo a number of times and she is one of my academic/activist role models. Gadzekpo suggested there were no winners to Aidoo’s walk out. She highlighted the important work of the event organizer Centre for Gender Studies and Advocacy at the University of Ghana, CEGENSA, in advocating for women (I have blogged about their pioneering zero tolerance policy on sexual harassment for instance) and suggested:

“I point out the bona fides of the Centre not to excuse the misspelling on the banner and in the programme heading, but to simply provide information on a little known centre caught in the eye of a public storm and now defined by the unfortunate incident for people who had never heard of it or know very little about what it does.

I have read several comments suggesting the Centre did not know the correct spelling of its honoree’s name and had disrespected her by getting the spelling wrong. Nothing could be further from the truth.

CEGENSA does know how to spell Prof. Ama Ata Aidoo’s name and is very familiar with her work. In all other correspondence with her and her foundation Mbaasem, before and during the planning of the competition, the Centre got the spelling right.”

Although, I understand the organizer CEGENSA’s situation as discussed by Gadzekpo: the overwhelming negative publicity focussed on a centre that has created real change for women, and the looooong enduring debate that followed – and that now I am adding to –  I would like to look beyond “who was right/wrong” and look to what we learned.

You see, I think Aidoo was not only sensitive or annoyed, but wanted to send a message about standards. Something like: Mistakes happen, but normalisation of those mistakes is dangerous! It is not OK to use misspelled banners and brochures, especially for an academic centre, especially when honouring someone and the mistake is in the name of that person, especially when you are an institution focused on women’s rights in a patriarchal society and role models are so few (although many of mine highlighted in this blogpost).

Maybe Aidoo was thinking about the embarrassing mistakes in official communication of late in Ghana, most notorious of them the State of the Nation program for 2016 that…I just can’t. Read Elizabeth Ohene’s furious account. In addition, Ansu-Kyeremeh lists a few other instances when attention to detail has been lacking in Ghanaian communication.

So here, I have to disagree with Gadzekpo. Sure, walking out is like sending an angry letter, it is not pretty. However, there is a win to making this extra “T” a big deal. After Ama Ata Aidoo walked out, the issue of striving for excellence in communication has been discussed in Ghana for TWO WEEKS, so walking out was successful from the point of view of creating a debate. As a lecturer of Written and Oral Communication, a learning moment for a nation on the importance of attention to detail, makes me happy.

But what about the young women who had written stories for the competition? Gadzekpo listed the winners as Nana Yaa Asantewaa Asante-Darko, Margaret Adomako, Ruthfirst Eva Ayande,  Sarah Faakor Toseafa, and Awo Aba Odua Gyan. Their award night was ruined! Or was it really? I think Aidoo will find a way to read their stories, and so will many more of us (perhaps they can be published on the CEGENSA website?) While the young writers might have been initially disappointed,  soon I think they were rather empowered to see a woman who can: that a woman has choice. If she wants, she can always vote with her feet.

Now, would I have done the same? Would I walk out from a festive writing competition held in my honour because of my convictions? Probably not. But then again, I am not Ghana’s foremost trail-blazer feminist, writer, educator, and activist. I only aspire to be like her.