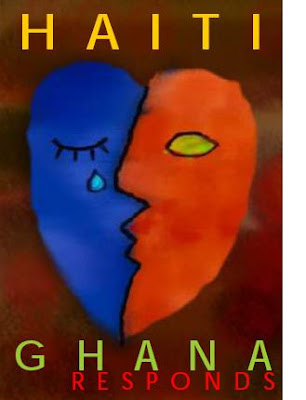 The Friends of Haiti and Ghana Red Cross has sent out a joint press release about an upcoming concert to raise funds for our brothers and sisters in Haiti.

The campaign consists of a star-studded benefit concert in solidarity with the People of Haiti which will be staged at Alliance Francaise on Saturday the 23rd of January; and an SMS campaign aimed at raising GHC two million. The venue for the concert has been donated by Alliance Francaise, with all the billed artistes also performing free of charge.

Except for putting together a b-e-a-u-t-i-f-u-l poster, the stars performing are really stars too, Kojo Antwi, Kubolor, Kwabena Kwabena, Black Rasta, Becca, Ambolley and many more. Tickets go for 10 GHC. On top of that Foundation for Contemporary Art, will also have an exhibition in the same space where 30% of the proceeds will go to the Ghana Red Cross fund for Haiti.

To conclude, there seems to be many reasons for attending this event, out of which the noblest is of course to extend a hand to the suffering people in Haiti, but I’ll be going to shake my ass just a little bit as well.

Pic: From the official invite to the concert, courtesy Ghana Red Cross and Friends of Haiti. 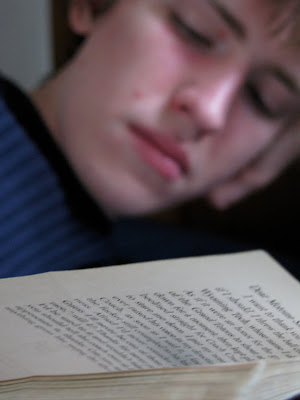 I challenge all the good writers I know to enter into the Summer Literary Seminars Unified Literary Contest, see a message from the organizers below:

Summer Literary Seminars is announcing its annual unified (Montreal, Lithuania and Kenya) literary contest, held this year in affiliation with Fence Magazine. We are thrilled this year to have Mary Gaitskill judging the fiction, and Mary Jo Bang judging the poetry.

Contest winners in the categories of fiction and poetry will have their work published in Fence, as well as the participating literary journals in Canada, Lithuania and Kenya. Additionally, they will have the choice of attending (airfare, tuition, and housing included) any one of the SLS-2010 programs – in Montreal, Quebec (June 13 – 27); Vilnius, Lithuania (August 1 – 14); or Nairobi-Lamu, Kenya (December).

To summarize, this contest has two really good prices,
1. publication in Fence magazine and
2. a sponsored stay at a writing workshop to develop one’s skills!

The catch? It costs 15 USD to enter the contest and the deadline is just around the corner (February 28, 2010).

Pic: Write something someone else can read!

So, now it’s official: I am making my BarCamp debut early next week! The Ghanaian version of this world wide “unmeeting” is taking place at the Meltwater Entrepreneurial School of Technology (MEST) in East Legon, Monday the 21st December the whole day. See more information about the event here.

Although the strange name of this happening suggests something as scary as “camp”, I am still excited about the free meeting format and three more things.

1. It looks like ghanablogging will be holding a session about forming real life groups from online communities.

2. The organizing group this year are much more locally anchored compared to in 2008 when (it seemed like?) all organizers came from abroad.

3. The founder and president of Ashesi University, Patrick Awuah is giving the keynote address, and he is a very good speaker! As he is also my boss, that part of the BarCamp will be like a regular day at work…:-)

Hope to see some of you there! 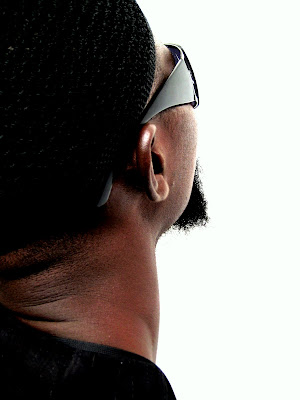 I’m terribly excited, a urban and outright cool event like a poetry slam for the first time in Ghana!

It takes off tonight Wednesday 16th of December 2009 at Alliance Francaise (close to 37 tro-tro station) at 8.30 PM. This is what the poets themselves say about the event.

EHA-LAKASA is the name, POETRY is the movement, SLAM is the battle. “EHA-LAKASA POETRY SLAM 09” is a unique initiative intended to redefine the poetry landscape in Ghana as a medium of communication and exchange of ideas. EHA-LAKASA is a straight talk, street philosophy, poetry and music expressed by the arts. This is the first undisputed lyric-smith battle to storm our nation’s capital; it will be a night of fire works with lyrical vibration. 15 Eha-lakasa poets will enter the ring but only 5 will survive and 1 should stay alive.

So, of course I am looking forward to the competition part which gives this program its special edge, but I am betting the best performance of the evening will be by my talented friend Sir Black. Stay tune for YouTube updates!

>
It seems Ashesi Founder Patrick Awuah is on a winning streak – This week, he was honored with the 2009 Integral Fellow Award by his former employer, Microsoft. See press release here and finalist video above.

The mission of the award is

to catalyze the collective power of the Microsoft alumni and leverage our resources on innovative, scalable, transformative solutions to our world’s challenges. Integral Fellows serve as that catalyst, sharing their stories of struggle, success, and inspiration.

Even though I am not particularly a fan of Microsoft, I must say it really impresses me to hear about them having an “alumni” foundation. It is something very modern about a company suggesting that employees will at some point “graduate”, not quit (or stay the rest of their working lives). So far, none of my former workplaces have considered me an alum – but I guess they should. I still care about what is going on where I have spent thousands of productive hours and I owe much of my success to what I have learned with them – and I guess it reflects well on them too when I do well elsewhere.

Is this the new work market we see unfolding?

>Just saw the first major motion picture to be based on a blog, Julie & Julia.

It was interesting to see a film (loosely) based on a blog, but I must say my friends and I much preferred the story about the eccentric cookbook writer Julia Child, whimsically performed by Maryl Streep, compared to the bland “heroine” Julie the Blogger. Ultimately, a blog should provide you with stories you otherwise do not get access to, but this blog seemed to be a rather predictable story on how to become a famous blogger. 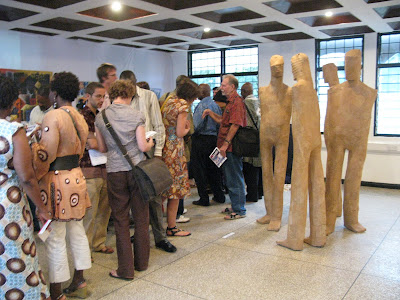 In two weeks, Accra hosts an interesting conference, 2nd International Conference on African Culture and Development, ICACD. The program can be found here.

The secretariat of the newly founded organization is placed in Ghana’s commercial hub, Kumasi and it was also there the first conference was held in 2008. A participant, Erica Borgstrom, published her reflections after that first meeting here. She writes:

The conference illustrated precisely how complex the idea of ‘Africa’ is whilst physically demonstrating how competing agendas affect this notion. The premise of ICACD is to be an ‘African Cultural advocate’ to influence policy, placing culture on the broader African development agenda. For its inaugural meeting, ICACD attracted an array of individuals with varying backgrounds and aspirations. Their differing agendas soon became apparent in presentations and discussions. Primarily, this resulted in the (often confusing) multiple and differing use of the word ‘culture’, consequently affecting their attitudes towards an implementation of ‘culture’ in ‘development’.

Africa is not one! Why an initiative like this will not start with the scope of West-Africa – or even Ghana – is beyond me. Because, just like for the AU, geographically broad initiatives that recognize no difference in agendas or set any rules for membership, become toothless.

The second item brought up in the quote above, I also found very interesting since I personally recognize this problem of defining ‘culture’. Being interested in the arts in Ghana, I have been confronted with this often conflicting of interpretations to ‘culture’ – two brought out by Borgstrom are 1) the touristic and sometimes stereotypical “traditional” culture including dancing and drumming and 2) the culture linked to how we choose to live our lives. And then I’d like to add the 3) culture involving all artistic expression, focusing on contemporary expressions, that Borgstrom does not discuss.

However, the issue is critical – what kind of development do we get if culture (whatever the definition might be) is not included? Also, I’m guessing the other executives (I’m the treasurer) of Accra Cultural and Arts Network (AccraCAN) will be there. So, I might steal time away from my regular job to go see if discussions have progressed since last year.

Pic: people and sculptures of people at a vernissage in August at the University of Ghana. Sculptures by the Ghanaian artist Kofi Setordji. 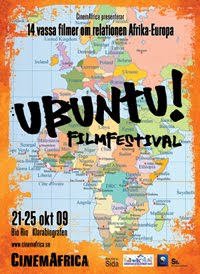 Tomorrow, CinemAfrica opens this year’s African film festival in Stockholm, Ubuntu! According to the program 14 films will be shown. None of them are unfortunately from Ghana, but one from Senegal (Mother) and one about Liberia’s President (Iron Ladies of Liberia). See the trailer on YouTube here.

Tickets for the festival can be bought at BioRio.

Interestingly, the Urban Africa Movement that I blogged about here is showcasing some of its photos during the festival.

Oh, I love all of this. I think I have to arrange a similar event in Tema. 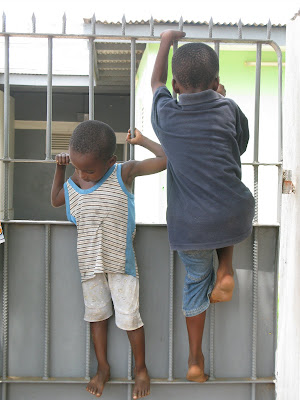 Let me share some Sunday thoughts about developing my blog. My ideas so far are:
I want to

…and soon I’ll tell you more.

What do you think? Does the name of a blog matter? How it looks? How its posts are categorized? What topics it presents? What URL it has? 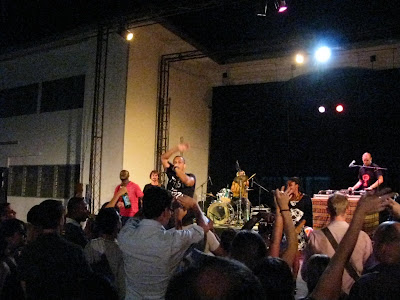 Starting today and running until Saturday, Alliance Francaise organizes a Jazz festival in Accra. Every night at 8.30 pm there will be concerts with different jazz musicians. Seeing the program, I do not know what to make of it as all names, thus far, are new to me; Babu Group(Tue), Chico Freeman(Wed), Ka-Tam Trio (Thu), André Jaume (Fri)…

But I’ll gamble by letting my schedule decide and go as many nights I can.

Pic from an earlier event at AF in Accra.

>For you who, like me, LOVED The Perfect Picture (I posted on it here ) – I have some good news.

According to the blogger Ameyaw Debrah, Writer/producer/director Frimpong-Manso’s new film will be called A Sting in A Tale and can best be defined as an “adventure comedy”. And it’s coming in November!

Also, I wonder who would know how much her previous film made at the box office in Ghana and around the globe?

Ps. There is no decent picture of this superwoman online, please NKA, do something! 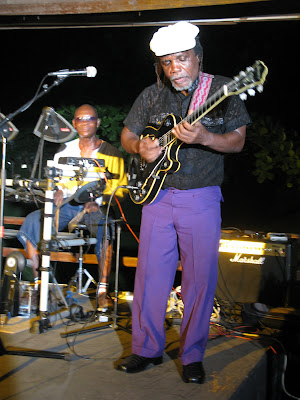 Osseo-Asare writes on many (all?) different aspects of Ghanaian foods – the culture surrounding it, how to make fufu, grilled tilapia and Fante kenkey, as well as the ceremonial uses of Oto etc. The website is complemented by a couple of books (which I have not seen in Ghana) and importantly also features a blog! Latest updated on Thursday on the Ghanaian breakfast served to the Obamas in Ghana on their visit in July.

I think of Ghanaian cuisine as a kind of culinary jazz. The pepper, tomatoes, and onions, and possibly the oil, form the rhythm section. The stew is one musical form, like blues, the soup and one-pot dishes are others. Like a successful improvisation, the additional ingredients vegetables, seeds and nuts, meat and fish harmonize and combine into vibrant, mellow creations. While Ghanaian cuisine is very forgiving and flexible, there are certain “chords” or combinations that go together, and others that do not. Part of mastering the cuisine requires learning these chords and developing the sense of what goes with what: gari or fried ripe plantain or tatale (ripe plantain pancakes) with red bean stew; kenkey with fried fish and a hot pepper sauce like shito; banku with okra stew; chicken with groundnut soup; soup with fufu; palaver sauce with boiled green plantain or yams or rice.

Read my other posts on Ghanaian foods aka culinary jazz here.