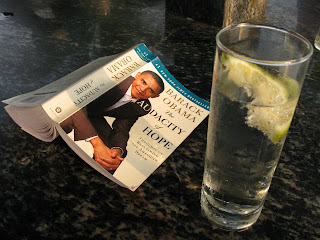 I recommend to anyone living in this time and age to pick up a copy of Barack Obama‘s “The Audacity of Hope”.

Reading this book is like opening the back door to the Obama inauguration frenzy, including colorful pop-art posters, music galas and celebrity worship, and coming out on the other side of the stage and see that the sky is really blue.

Yes, his election really signifies change due to who he is, but there is more.

It becomes clear that this man is a calm, reflecting but determined do-gooder (funny fact: according to wikipedia Michelle and Barack’s first date was to see the movie “Do The Right Thing”) who has a dream of letting complexity back into politics. The book is about many other things (chapters are called Values, Our constitution, Race, etc.), but to me the message of complex decision-making resonates. Not every issue can be answered with “Aye” or “Nay”, there are trade offs in policy-making and most issues need a bit of explanation before we can take a stand. He also comes down on the polarization between Republicans and Democrats, itself a simplification, in the American political system, but adds that the media thrives off of it:

Your quote doesn’t run if you say, “I see the other guy’s point of view” or “The issue is really complicated”.

I can’t help but think that the current economic crises might be just what Obama needs to create a less partisan, less simplistic and more constructive political arena. What we can do, wherever we are in the world, is to accept his challenge of complexity and ourselves get more involved in politics, and maybe also give less meaning to abbreviated news clippings.

The book also has a couple of funny incidents from the (senate) campaign trail, like the one about the guy from Obama’s opponent’s office who followed him everywhere with a hand-held film camera. After he refused to give Obama even the smallest personal space, Obama introduced him to the press during a briefing. Later he got a apology from the opponent, who by then had been hurt by the story of the persistent and rude filmer.

The New York Times called Obama “level-headed” in their review of The Audacity of Hope. To me, that is a excellent attribute for a world leader to possess.

In Ghana, I am going to view the inaguration ceremony at the Du Bois Center in Labone, Accra and in the evening I have been invited to a celebration arranged by the Africa-American Association of Ghana (AAAG) at Sweeties Night Club in Airport Hills.

Why Ghana’s MPs Should Be Grateful for their Grades

Guest Post: Why you should (not) read García Márquez