In connection with the first broadcast of my program, Frontline 2012, the Swedish national radio called for an interview. When they first called on the day of my TV debut, I had no time to spare, so decided to talk to the reporter from the hair salon chair where I was getting ready for my big night.

Although I was stressed and had to switch ears several times to not interfere with my hair cut, the program Verkligheten i P3 went live on Tuesday and came out really nice in my own humble opinion. 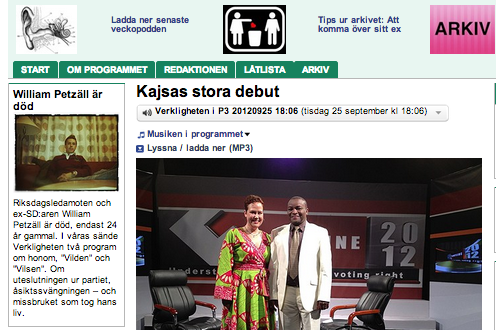 Apparently the program was running a series on “unknown celebrities” and they thought I was a perfect fit as someone interviewing presidential candidates in a country far away!

If you know Swedish or believe you are a language genius, you can listen to the program here.

3 Replies to “Frontline on Swedish Radio”

Spring is returning
✨Join me for morning Yoga! ✨
✨Today I am 40 years on this earth!✨