Behind the Scenes of Frontline 2012 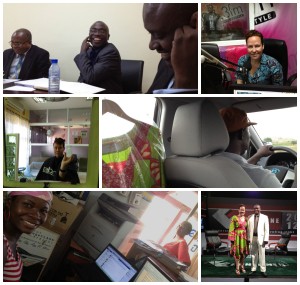 My first season as a TV show host is behind me (that is if elections do not go to a second round). Half a year ago, I would have never believed anyone who said I’d be a regular TV host on a big TV station, but alas, I now have 11 one-hour interview programs behind me! Hence I want to share some thoughts, experiences and insights from behind the scenes of TV3.

It could not have been done without the support of the three gentlemen in the top left photo above, the former CEO of TV3 Prof. Gordor, my producer Bright Amfo and the news room boss, Robert Kyere. They have been extremely supportive and always helpful. They have listened to my suggestions and at times, my whining. Despite extreme schedules, (Bright produces and/or hosts half of news broadcasts on TV3, Robert directs the newsroom Mon-Sat every week), they have seen me, polished my journalistic skills and believed in me – every week. Thank you.

Also, I want to thank my academic supervisor Dr. Michael Kpessa who recommended me for the job and apparently saw my potential. Apart from helping me in my new capacity in numerous phone meetings, he has taught me about what it is to be a true mentor. Thank you Mike for convincing me I could do it and for forgiving me for missing most my research deadlines of this semester…

In the pictures above, you see me doing promotion for my show on Citi FM, getting a haircut before the first show, riding in the TV3 company car to my first program and printing my script in a local cyber cafe in Tema before the last picture and the live broadcast. As you see, it is a mix between luxury, fun and very mundane experiences. Hence a very tiny bit of my week is living like a celebrity and much more is simply hard work.

But t is true that in my daily life, people increasingly recognize me from Frontline. At times, someone will say “You know, you look so much like a woman on TV…”, other times “Hallo! Frontline!” or once, “Hi Ewurama!”, to which I responded, “Hi, please do I know you?” and the person smiled widely and said “No, but I know you from the TV screen!”

A highlight of my celebrity life was last week when I was asked to contribute to a panel on media’s responsibilities in the elections on campus. For the first time, I was not a moderator, but a media personality and an expert. That felt great! Another was being interviewed on Swedish radio.

Over all, however, I can’t say I see myself as a celebrity or that my life has changed in any significant way. To illustrate my point, last week, someone wanted to take a photo with me in the supermarket (!), but alas that also happened a few times last year, long before I was anything like a public figure!

As I am an academic and not a journalist, I had no camera experience and had to be extensively trained. I did about 6-7 mock interviews on camera and spent hours in the studio the month before the first broadcast. Very nervous at first, I managed to calm down with the help of advice from my mock interviewees, many of which were presenters themselves on TV3.

Anyways, there have been ups and downs. Snafus like the sound not working (1st program), the AC not working (3rd program), the guest arriving only 5 minutes before the show (I wont tell you which program) or me running up and down the TV3 building to try and print out my script before the live broadcast starts… On the other hand, there have also been moments where everything works smoothly, when my producer and I work in seamless tandem and when talking to the camera just comes naturally. After a few programs, I found myself having a lot of fun and enjoying the spotlight!

Let’s see if there will be more TV in my life, but so far, its been an exciting and educative ride. Thanks for following my TV career here on my blog!