Parenting in a New Environment

I am bringing my children up in an environment that is very different from how I grew up. Is that a problem or an added richness to their and my lives? 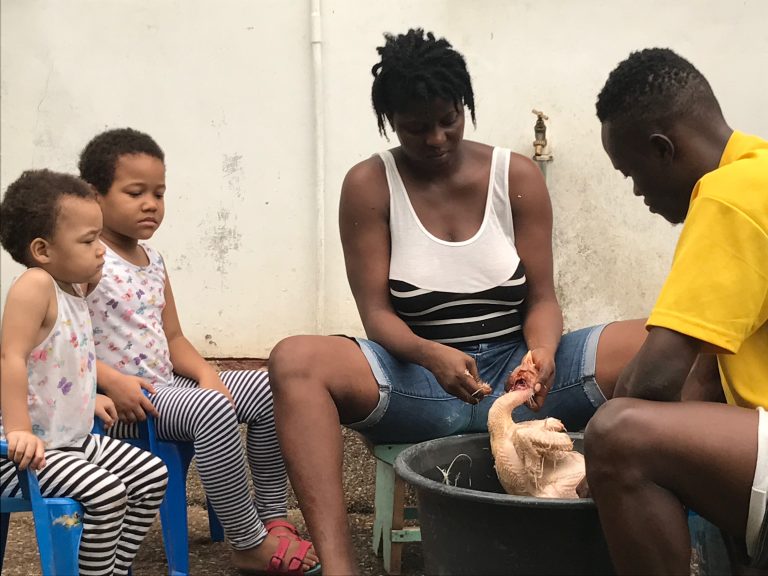 Maybe I have to start with what the differences are between my rural Swedish upbringing on the island of Gotland in the 1980ies and my girls’ in the industrial city of Tema, Ghana today:

It is much warmer for once, ok, ok to be more serious, they are exposed to more inequality, malaria mosquitoes, carbohydrates, direct sun, rigid school from an early age, time on iPads, and religion than I was and that I would prefer for them. However, they also have access to more extended family on a regular basis (my parents were mostly on their own) meaning a calm and regular schedule not depending on my workdays or moods, they speak several languages, while I only spoke Swedish until English was introduced in class 4. They eat less processed foods as that is not affordable in Ghana and know from our chicken and rabbit farms how meat gets on the table.

The behavioral culture in Ghana differs from the culture in Sweden in most ways from how to greet someone (a lengthy conversation including nicknames, hand holding, asking of family vs. “hej”) to how to behave as a child (don’t speak until spoken to vs. do what you want, you are a kid!). Generally, while I am still learning how to behave – I imagine it is good to know that contexts matter.

I do not usually worry much about this, mostly because as you can see, I think it evens out pretty much. Every time and place is different. Knowing different cultures is a definite advantage in every way. But as a parent, sometimes, like today, I just long for the 1980ies Swedish playful daycare “dagis”, no pressure, no religion or threat of the cane, meatballs and potatoes with a glass of milk for lunch, stuff I know and understand for my children.

Photo: Selma and Ellen getting a weekend lesson in plucking a hen from their cousin and his girlfriend who live with us.

This post is part of a series of posts about parenting.

You Know You Are in Accra When…

Colombia and Ghana: Religious Billboards and Other Similarities

By way of reading my BloggingGhana colleague Sandister Tei’s blog, I came across artist Herbert Baglione’s blog. Although this man is Brazilian, he had posted a string of black and white photos from Colombia that reminded me so much about Ghana.

This billboard advertising a religious website/ call center reminds me of the many religious billboards in Ghana. 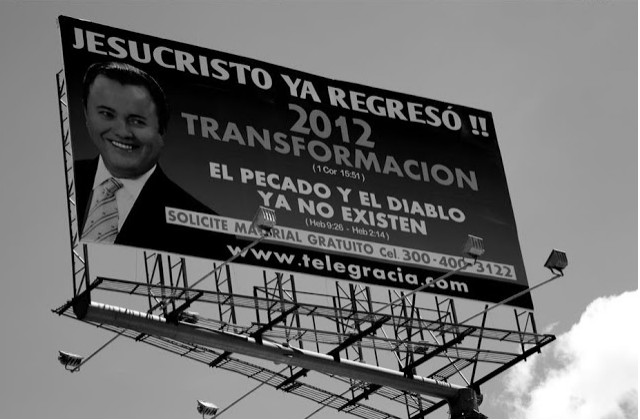 Is it the black and white that makes photos so universal and timeless? Is it my secret desire to go to Colombia shining through? Or does Ghana and Colombia really have much in common?

Suspended after a Tweet? Nana Aba Anamoah, TV3, and the power of Social Media

On Friday 23 Nov 2012, the first ever humanist conference takes place in Ghana. The organizer is the newly founded Ghana Humanists, a group I keenly follow on Facebook as I most definitely am a humanist or a freethinker. I also agree with one of the key speakers at the event, Nigerian skeptic Leo Igwe, that certain beliefs in Ghana – like witchcraft – are hurting people and need to be questioned.

I remember moving to Ghana and suddenly being under an immense pressure to go to church, praise God and believe! Quickly, I adopted a strategy that involved never speaking about my non-faith, throwing in some “Thank God!”, “By the grace” and “Insh’Allah!” in my daily speech and agreeing to visiting people’s places of worship (also I was curious, like most humanists!). If asked directly, I’d say I was a Lutheran – as The Church of Sweden is Lutheran – and I felt I wasn’t exactly lying, even though strictly speaking church and state were separated in year 2000.

It was such a relief, when I decided to speak up. It started when I began teaching and a student one day asked me about my faith. I just couldn’t say I was a Lutheran to someone I was going to teach. It didn’t feel right to hide who I was when I was telling my students to be proud of who they were. Although reluctantly at first, I now take the debate on issues relating to faith, especially with my students and particularly when it comes to dogmatic instructions of not asking, not questioning, not even for a second doubting.

One on one, I have talked about in depth why I can’t “give it to God”. In larger groups, I have initiated debate by for instance showing the film the Witches of Gambaga at the university where I teach and moderated the ensuing discussion. A freethinker’s club has recently been formed on campus and even though it is a small group and the Christian and Muslim groups have many more members, I still think its a great step to illustrate the diversity: Not everyone in Ghana is religious.

Should I Change My Name When I Marry?

Long Answer: I have always been a very careful person. I do not climb trees, I watch my step, I avoid scary places and movies. So when it comes to the issue of revolution, because that is what the implied-to-in-this-heading-Arab-spring was, I feel we should thread with care. Maybe this is why I, a foreigner in Ghana now on my fifth year in the country, merge so well with the Ghanaian population. My feeling is that Ghanaians are also careful, balanced and not in a hurry to start any revolution any time soon. Revolutions are risky. Upheaval of central state structures causes major confusion and sometimes violence.

My reasons for being cautious is probably some mixture of nature and nurture that you have to ask my parents about, but Ghana’s, I think, is due to these three reasons.

Contrary to the North African and Arab countries, in Ghana, there is an opportunity to speak freely. Freedom house deems Ghana “free”. This is a chief requirement for any democracy. As an example, Transparency International /Ghana Integrity Initiative’s Vitus Azeem can ask the President to justify the dismissal of the Attorney General. The other day we became aware Anas Aremeyaw Anas can expose a state company’s corrupt practices. We cannot control what happens next, but being able to ask the question without repercussions is vital.

A side effect to free speech is that anger rarely builds up. Face it, a revolution takes a lot of energy, and that energy is many times fueled by anger.

BBC in their write up on the topic suggests:

Today, ordinary citizens are demanding more of their governments than they have ever done before – and they are refusing to accept any form of mediocrity.

I disagree. In Ghana, despite the ever-present question “what will the government do about this?” , Ghanaians do not expect much from the state. Much like in the rest of the West African region, amenities like water, electricity, infrastructure as well as social deliverables such as some level of health care, education and security, we do not expect the state to provide, but rather help ourselves.

We buy our own water, we sit in the dark with battery driven lamps, we fill the pot holes on the road. We hope to work where we get private health insurance, we send our children to private school and build fences around our houses. Some even hire a guard.

I think for the oil producing, actually quite rich country of Nigeria, the one thing Nigerians expected from their government was fuel subsidies needed to run their generators,  for transport and for running most businesses when electricity on the grid, like the rest of the world enjoys, is a dream. When that was taken away, there was a protest. Yes, I know they said they protested against corruption too, but really that is nothing new and it had not made them take to the streets in numbers before.

However, the influence of religion in Ghana – and possibly in other West African states – seem to further cool sentiments and depoliticize human existence. (Yes, I am thinking very much in the wakes of Marx here). It seems the Ghanaian road to change will not be led by the church.

To conclude my argument, see this Tweet (now when I know how to re-post them, I can’t help myself) for instance.

An “Occupy” movement in Ghana – Osu is an area in central Accra – is laughable. “Enye easy” or “it isn’t easy” is exclaimed, much like it is used in daily speech – as to say “life in Ghana is not always easy, but let’s not hinge on that. Let’s cool down, let’s be careful, let’s meet the change slowly”.

BBC launches its new program The Africa Debate with a, thats right, debate in Accra “Is an African Spring Necessary?” on Friday 27 January 2012. 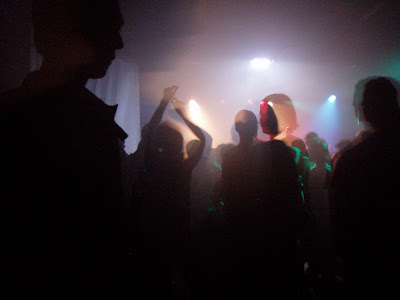 Seriously, Ghanaians!?
Noone is throwing a New Year’s Eve party? Not even a small one?

”Traditionally” (would be interesting to know when and where this practice comes from), New Year’s Eve in Ghana is a day for contemplation, gratitude and prayer – clearly a Christian holiday! Most people dress in white (celebratory clothing) and head for the churches around 8-9 pm. The final hours of the year is spent praying, listening to sermons and singing hymns. Many times, the sermons are held outside the church room, as the crowds cannot fit inside the chapels and churches. The transition to the new year has nothing like the festive ”10-9-8-7…”, rather it is a very serene and gradual change with nothing special to mark midnight. However, around 1 pm, many people start heading home. (And from what I hear, some of these churchgoers then changes into other clothes and head out for a drink, but this is a different story).

So, what is the problem? Well, it is strictly personal, I suppose: I just miss the European way of celebrating New Year’s Eve. I miss having to choose between parties. I miss the anticipation for the New Year. I miss planning ahead for a most luxurious evening with shiny and glittering outfits, chilled champagne and beyond good foods. I miss the obligatory chant of ”10-9-8-7-6-5-4-3-2-1-HAPPY-NEW-YEAR!” I miss kissing friends and family in a delirious state and then topping it off with more bubbly and dancing!

However here in Ghana, it seems no parties are planned for tomorrow night and I am still the only one considering Christmas the main Christian holiday in December.

Pic: Party outside of Ghana.