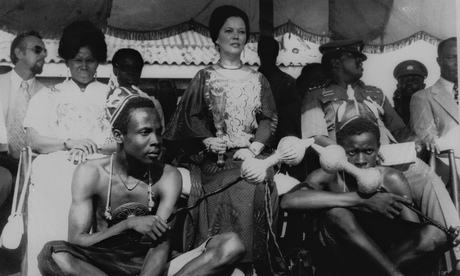 Americans have for long understood the potential of a face known from film. Not just President Ronald Regan or Governor Arnold Schwartsenegger  made the transition from white screen to colorful politics, actress Shirley Temple did too.

In 1974 she landed in Ghana as the American ambassador. The country was 18 years out of colonialism, but head-deep into dependency, especially due to the American oil crisis at the time. Temple stayed in Ghana for two years.

When I first heard about this interesting career change and Temple’s time in Ghana, I marveled. I became almost obsessed with finding photos of Temple in Ghana and my eyes widened as I saw her coiffed hair bobbing around in the Ghanaian sun surrounded by traditional leaders and welcoming parades.

It would be interesting to know more about what her everyday life in Ghana was like, maybe now that she is gone, some writings might appear? Some interviews will be done? but never the less, her life reminds us that no matter where you start in life, you might end up in Ghana, smiling in the sun.

Photo borrowed from The Guardian from a worthwhile biography.