This is Surprising About Having Children

I was recently asked: “What about having children was something you did not expect?” It was a good question. I had to think for a bit. Many things were just as expected: The joy of seeing your children run towards you, the tiredness you feel from never ever getting to sleep enough, the 1000s of photos (10,000s?) on my hard drive of every single cute thing they do, feeling conflicted when I leave the house without them, singing my childhood songs with them. But what was a surprise? 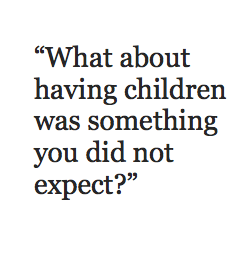 After wading through my sleep deprived and sluggish mind, I found a recurring surprise in relation to my oldest child, a talkative five year old (I hear they all are talkatives). The frequency of which she thinks and talks about the miracle of her being my child is a surprise. How many times she asks: “was I really in your tummy?” or exclaims “min mamma”, “my mommy” with an emphasis on our bond. I think I had somehow expected that my child would take her being alive, her coming from my tummy, her being our child, as a given as she knows nothing else.

That a kindergarten aged child is able to reflect on the miracle of life, and does so almost every day, was a surprise. And a surprise that amazes and thrills me. I am happy to entertain this rather deep and at the same time basic thought. I reread her favorite books in the genre “Hur jag blev till”, “How I was made”. She often asks for and can listen to the story of her own birth time and time again. 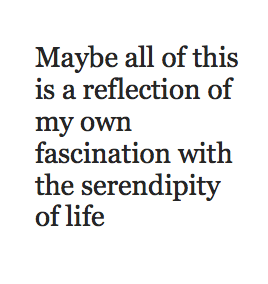 Maybe all of this is a reflection of my own fascination with the serendipity of life and the magic that mysteriously brings us our little ones, but then still it blows my mind that my child is in a sense just like me! At the age of five!

This post is listed under the category Parenting and is part of my effort to write more about my children on the blog.

When your child is sick with malaria

My Children on the Blog

Last Month of Pregnancy and 40 plus 5

“The last month of pregnancy is exhausting. You’re convinced your body will fail to work and that labor will never start. You’re convinced that this pregnancy, once so new and beautiful and interesting, will stay with you forever, rendering you fat, farting, burping, heartburning, mildly insane and tearful for the rest of eternity.”

Explore this Medium story by writer Ruth Fowler and photographer Jared Iorio on the birth of their first born!

( Please note this is an honest photo essay with drugs, joys and blood mixed, so not for sensitive souls!)

What We can Learn from Sister Deborah’s “Uncle Obama” Video

>Tropical Contemporary Architecture: How to build a house in Ghana

Ghana’s Most Important Issue via The Maternal Health Channel

A wonderful initiative by Creative Storm is the Maternal Health Channel on GTV on Thursdays at 8PM and on TV3 on Fridays at 8.30 PM. The program sheds light on maternal health in Ghana, or rather the lack of it.

The series started with the story of Charity, a woman who did not survive giving birth.

“Every maternal death is an intensely personal tragedy and it is essential to hear the stories of those who have suffered in order to illuminate an issue that is both immediate and far more complex than it seems on the surface.
We can change; Ghana can achieve Millennium Development Goal #5, the reduction of maternal mortality by 75% in the year 2015. The first step is EVERYONE having a discussion about an epidemic that is far too often overlooked. The first step is with YOU.”

As a mother and a daughter and a citizen of the world, it angers me terribly that women should have to give up their life when giving life. We know it takes 9 months, we know you need vitamins and clean water, we know giving birth is a risk and a hard job, we know how to create the best possible chances for both mother and baby to survive – still women are  dying for no good reason at all.

This week, they go to Kute Buem in the Volta region, see pic.

Personally, I think The Maternal Health Channel is one of the most important media initiatives in Ghana I have ever seen. It is massive, well thought out and quite digital (facebook, vimeo, tumblr, on Twitter use hashtag #mhcghana). If you agree with my sentiments or, better yet, with their mission to save more mothers and babies in Ghana, please spread this information to your networks, discuss online, blog on it and watch the program!

I have written on this topic before Why Are Mothers Still Dying? and When I Donated Blood and Ganyobinaa also wrote about MHC.

Yesterday evening, I started feeling ill. My throat was dry and my body was aching. Just a little while later, my cheeks suddenly felt very hot and I found my thinking slowing down and I just knew it – I have malaria!

The fear of contracting malaria was the biggest obstacle for me moving here. I had heard about dying children, the importance of profylaxis from travel websites like this and could not make it fit with what my Ghanaian friend talked about as “a cold, nothing worse”. The first time I had malaria, was also the first time I was back in Sweden after almost a year in Ghana. We travelled from a 30 degree celsius tropical night to a bright and crisp winterday of about 10 degrees below zero! I thought it was pretty normal to feel cold! That time, because it took me almost a week to understand my symptoms, I was hospitalized from “severe malaria” and learned about how the parasites multiply exponentially leading to that you can get very ill quickly after you fall sick.

Fast forward five years, I have had malaria a couple of times (for instance in May 2010) surrounded by much less drama – Now I am too thinking of it not much more than of a cold, well the kind you need to take medicin for. However, although malaria is no more a serious problem to me, malaria is a serious problem to Ghana. In 2007, UNICEF estimated that every year 3,5 million Ghanaians get malaria and 20 000 children die from it, that is 25% of deaths in children under 5 years, although newer numbers suggest 33%. Sadly the cost of treatment or distance to a health facility will be the cause of non-treatment. Another interesting –  and devastating – aspect of malaria is the hidden costs. UNICEF says:

• A malaria-stricken family spends an average
of over one quarter of its income on malaria
treatment, as well as paying prevention costs
and suffering loss of income.
• Malaria-afflicted families on average can only
harvest 40 per cent of the crops harvested by
healthy families.
• In endemic areas, as much as 60 per cent of
children’s schooling may be impaired as a
result of repeated bouts of malaria.
• Malaria-endemic countries are among the
worlds most impoverished. The cost of malaria
control and treatment slows economic growth
by about 1.3 per cent a year in Africa.

Initiatives such as the (American) president’s malaria initiative are trying to roll back malaria and Ghana has recently had successes in distributing mosquito nets and giving pregnant women precautionary malaria treatments (I took them, myself), but are they enough? When you see open gutters being constructed as I write this (a prime breeding ground for mosquitos) and trash everywhere (another favorite place where mosquitos breed) – it feels like we are going backwards rather than forwards.

And I feel I have to go lie down a little bit.

ECG Corruption Revealed by Anas Aremeyaw: The Reactions on Twitter

This is Personal Business: Customer Service Lessons from Ghana

>Did I Dance with Kojo Antwi? Part III or Photo Evidence

When Did You Last Learn Something New?

Yesterday was mother’s day in Ghana and in many other countries (however not in Sweden!). Celebrations here in Ghana are maybe a little more pronounced than in Sweden, but apart for some Mother’s day parties and marches, pretty much the same. This year as every year.

Except for one, important thing. This year, I was included!

I got to hear several times during the day that was spent with mother-in-law, relatives and friends. So, yes, now it is official here on my blog too: I am expecting a baby! I am going to be a mother!

How did you celebrate mother’s day?

By the way, I had to check Wikipedia for the spelling and liked the information on the apostrophe:

In 1912, Anna Jarvis trademarked the phrases “second Sunday in May” and “Mother’s Day”, and created the Mother’s Day International Association.

“She was specific about the location of the apostrophe; it was to be a singular possessive, for each family to honour their mother, not a plural possessive commemorating all mothers in the world.”

By the way 2. I added the categories “Pregnancy” and “Parenting” under “Personal”. More posts on these topics are likely to follow…
Continue Reading

What Do You Do with a Baby All Day?