Where is Africa on Open Data? Some answers from #AODC17

African Open Data Conference 2017, or #AODC17 for short, was a five-day affair in Accra last week (or up to a week if you included some pre and post arrangements). I was there for two days, Tuesday and Wednesday, mostly because that is what my schedule allowed, but also because those days had the least of high-level dialogue – which is often not very productive – and I was more interested in African Open Data on the ground.

1. The field of open data is exploding, the conference was a major to-do with buy in from Ghana’s president and many international organizations as well as several hundred delegates.

2. The networking was out of this world, among the most interesting people I met were academics Umaru Bah,  Jeanne Holm, activists from BudgITng and Connected Development, blogger Chioma Agwuegbo, tweeps  …students…old friends like Nnenna Nwakanma of World Wide Web Foundation, Nehemiah Attigah of Odekro (links for organizations or linked in profiles), Dorothy Gordon…

3. The individuals involved in Open Data are in much renaissance people, it is programmers-entrepreneurs-governance experts, professors-public servants, accountants-activists, story tellers-national security etc. I felt at home and got inspired to stop forcing expertise and continue on my “wide” career.

4. The base level of what constitute best practices in the open data space is not yet set, exemplified by that Government of Ghana can sponsor such a conference and yet not have passed the rather basic Right to Information bill (I learned at #AODC17 similar have been passed already by Nigeria: Freedom of Information, and Sierra Leone for instance). GovLab‘s “periodic table” (interactive link or see below) of Open Data captures what is needed beautifully. I just have one question: Now how do we go from talk shop to action? 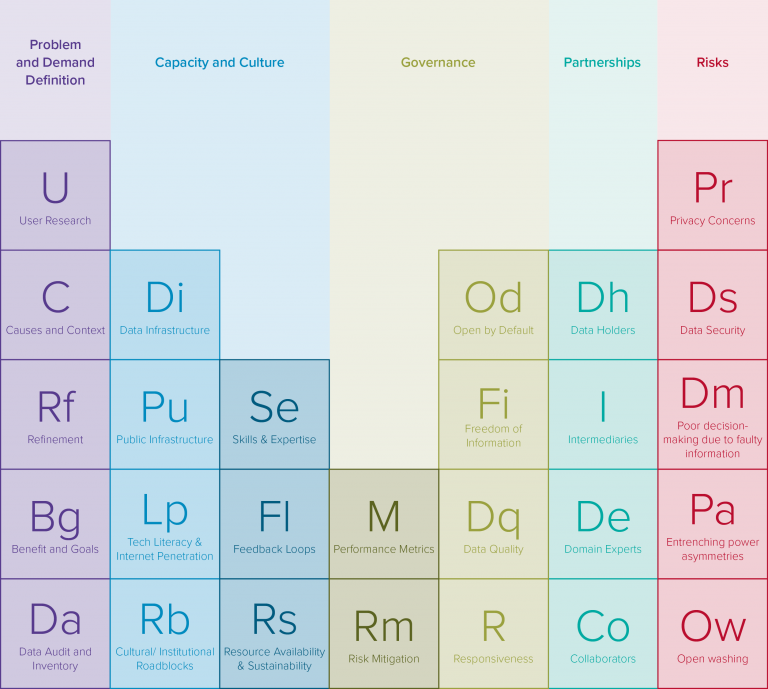 5. The events held about town were a good attempt at integrating the conference objectives with its surroundings, so to speak opening the data of the conference, something often overlooked in conferences.

In all, these were intense days for me, days I feel have impacted my life in a number of important ways both with inspiration, and network. See tweets and next steps/links below.

Awkwardly, the International Conference Center in Accra is in darkness this 2ns day of the #AODC17. A stark reminder of our challenges! pic.twitter.com/CZzdGBmLLY

Productive ??cocoa break with @Fkoku and @kwazibruce, solving lack of awareness issues on the constitution and “fake news” #AODC17 pic.twitter.com/4eScMsL4KY

??Next #AODC17, I’m a co-moderator in an innovative education session to be held in ??Meeting Room 1 ??with @TungaMahadia @MorganOpenData pic.twitter.com/0RkhWA1zgJ

What We can Learn from Sister Deborah’s “Uncle Obama” Video