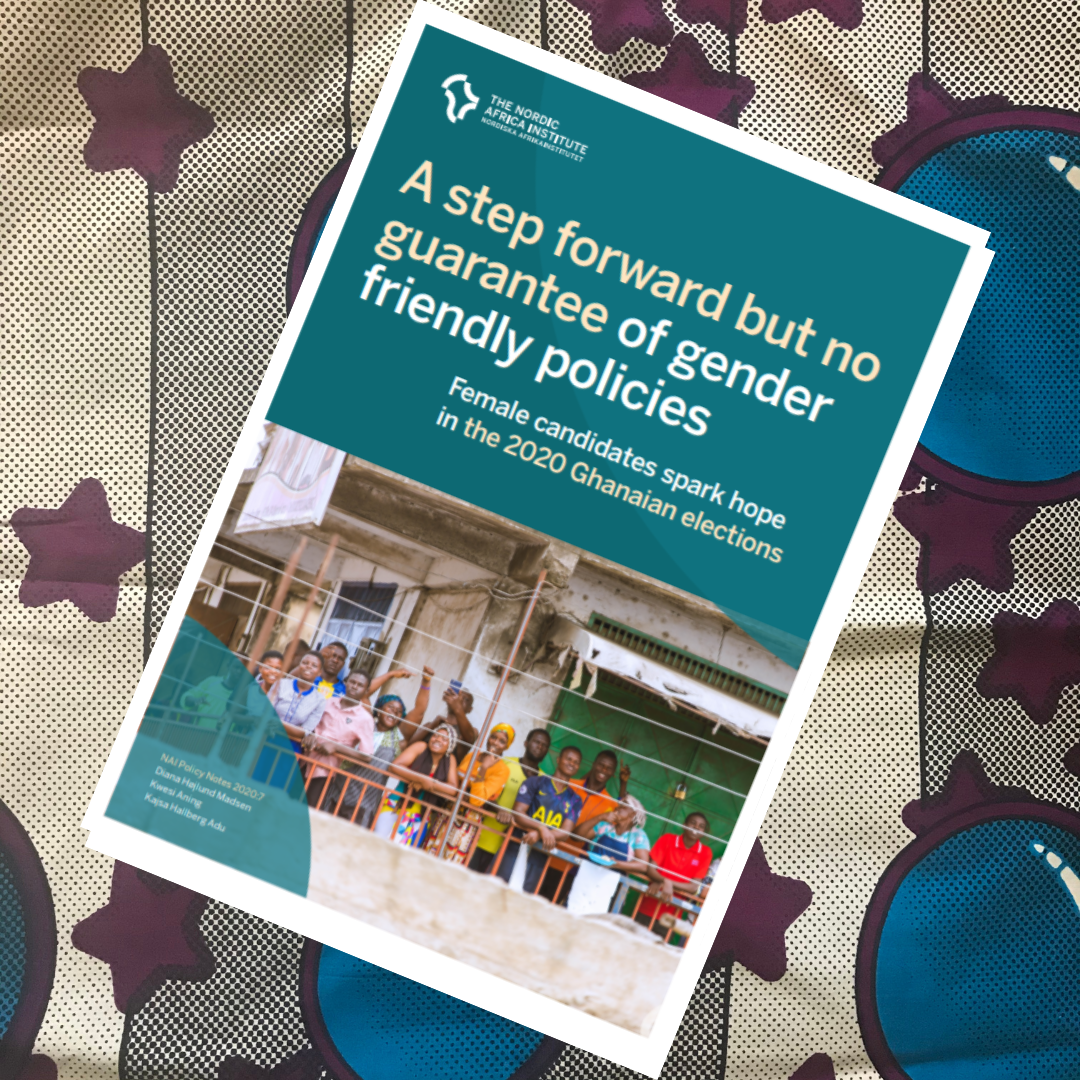 Election season in Ghana is special to me. I have lived through the 2008, 2012, 2016 versions of it and gotten more and more involved in each election cycle. So for 2020, I decided to be a bit proactive! Together with a colleague at the Nordic Africa Institute with a soft spot for Ghanaian politics, Diana Højlund Madsen, we planned an event and a policy note around the gendered aspects of the 2020 Ghana Elections.

The event was held on November 9th and now with days to the election, the Policy Note is in! The text was written together with one of the panelists from the event, a real Ghanaian scholarly treasure, Prof Kwesi Aning of the Kofi Annan International Peacekeeping and Training Centre!

In the policy note, we write “In the upcoming Ghanaian elections, a woman has, for the first time, emerged as a vice-presidential candidate for one of the two major parties in the country. Her candidacy has sparked hopes of progress on gender equality, but has also triggered anti-feminist and misogynistic rhetoric.”

Thanks to all involved in making the event and the policy note possible.

Read it in full here in PDF, Issuu and here in an online version.

Reactions to the State of the Nation in 2015: #SOTNGhana

This morning, Ghana’s president John Dramani Mahama stood in front of parliament to give us this yearly landmark speech. The radio stations have been gearing up for days and as a social media pundit who loves politics, I had been looking forward to this – very significant online – event.*

The state of the nation is kind of mixed at this moment. I mean not having power two nights/days out of three is very, VERY bad. But there are also improvements in infrastructure, especially water in the Grater Accra area. There is much hope that the pending IMF deal will restore confidence in the Ghanaian economy, but also many critical voices towards Ghana having to “go beg”. Many other aspects of the state of the nation can of course be discussed, but I will focus on the reactions.

Last year the State of the nation address was criticised for being too jovial This year, the tone was different, but I was saddened to realise that Ghanaians on Twitter could not take anything the president said in his speech at face value, mostly sour comments and satirical outbursts filled my Twitter time line. However, I was also not surprised. We are hot, angry and some of us hungry due to the current power crisis. It was also pointed out that a state of the nation address is supposed to chronicle what has happened thus far, but instead of somber reports, grand promises of future large scale projects were rather trumpeter out – election campaigning style! Mahama even mentioned what he was to do in his second term!

The opposition came to the parliament dressed in black and red to display their sorrow at the current state of affairs, and that deepening raft between governing NDC and opposition NPP is maybe the most worrying as, pointed out by small party PPP leader Ndoum earlier in the week, Ghana stands in front of challenges that need longterm, non-partisan solutions.

Now, Mahama towards the very tail end of his speech did touch upon that:

The greatest impediments to our national development are cynicism, & excessive partisanship -Mahama #SOTNGhana

Together we will build a strong Ghana. Our ethnic and cultural diversity must be a source of strength. – @JDMahama #SOTNGhana

I do agree with the analysis made by both Nduom and Mahama, but attitude and excessive partisanship are most definitely leadership questions. Where is the bipartisan IMF delegation? The humility of statesmen and women in the face of hard times? The rapid responses to the worst effects of power crisis for citizens? Not much of those around for now.

*Although it was puzzling to us the president “announced” a hashtag different from the one we have used for years when discussing this event: #SOTNGhana, but did not even use that new hashtag in his own tweets! (Thanks to @Kwabena for pointing that out)

A Day at the Car Shop

Here are some pics from the ongoing Google Elections Digital Tools Workshop.

10 Years of Blogging, This Is What I Know for Sure…