This year´s BBC Reith Lecture is given by philosophy professor Kwame Anthony Appiah. As you can possibly tell from his name, he hails from Ghana and is his lecture series he heavily draws from this – something for all of us who love Ghana to feel proud of and learn from.

Two lectures have already been aired (I wholeheartedly recommend listening to the podcasts). The first two of the total of four lectures cover Creed and Country. The last is to talk about Culture. The third lecture was recorded in Accra some two weeks ago and I was there! It was a Saturday and I happily tweeted:

Yeah, so people who spend Saturday night at an academic lecture are the best. #ReithLecture in ??@bbcworldservice

The lecture with the tittle Mistaken Identities: Colour used the amazing true story of William Anthony Amo, a Ghanaian boy who became professor of philosophy in Germany in 1738, as its red thread (I also mention him in my dissertation!) and discussed race with nuance and insight. He spoke about the “racial fixation” and reminded us there is no such thing as race, really.

Afterward, there was an opportunity to ask questions and I was thinking of something my daughter had told me…when the host of the evening asked women present to add their voices to all the men asking questions, my hand went up.

Afterward when the Ashesi staffulty present took a photo with Prof. Appiah we were reminded that he also sits on the board of the university! 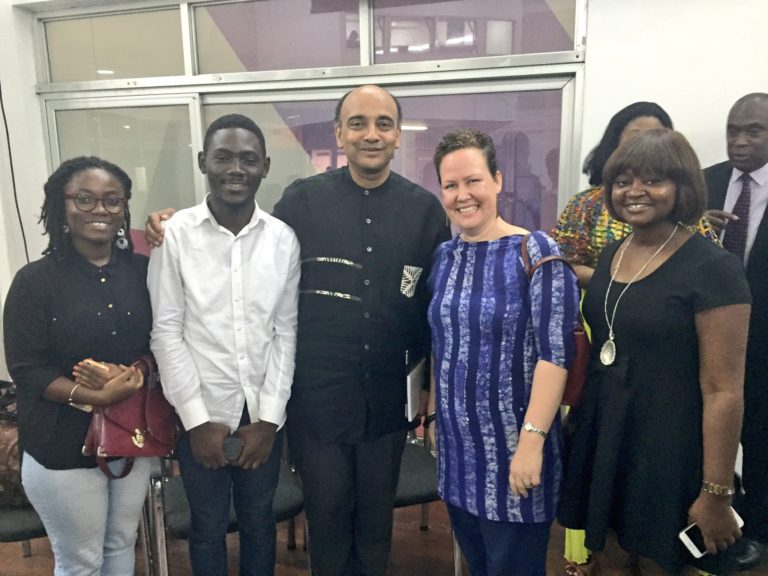 If you want to find out if my question made it to the final cut of the 2016 Reith Lectures with Kwame Anthony Appiah, tune into BBC Worldservice, Channel 4 or the podcast today!

My Love of Numerology or #233moments

My Fall 2012 at Ashesi: Teaching Communication

Researcher Alcinda Hondwana has discussed “waithood”, a prolonged period of suspension between childhood and adulthood. Hondwana used Tunisia as her point of departure, but since the concept was launched it has been debated if it is useful also for other localities?

BBC came to Ghana to carry out interviews with youth experiencing “waithood” and my student Kwabena Ankrah was one of them!

It is a serious problem when the potential of youth is not harnessed. However, in the program it is suggested that 95% of Ghanaian youth are not happy in Ghana, that the stability of our democracy is threatened by corruption, and that youth aspirations are unattainable…In  my research on student migration aspirations, I have tried to nuance the discourse by focusing on a particular group, university students. They are also Ghanaian youth, and have a more positive outlook, and its a group that is steadily growing!

Ankrah typically for a university student, sees opportunity in the many problems: “People get businesses because there are problems! If there are no problems, there are no businesses!”

Listen to the program that takes you to the Centre for Migration Studies, the slum that is known as Sodom and Gomorrah, and the dream of education and possibly migration…

Seasoned Blogger (me!) Teaching Writing for the Web @PenPlusBytes

How is the unrest in Ivory Coast affecting Ghana?

Back home after an interesting morning with BBC. The four panelists together with the 100 or so in the audience debated the issue I outlined yesterday in my post, Is an African spring necessary?

The panelists were Dr. Mike Kpessa from University of Ghana, a Political Analyst from South Africa, Anne Mugisha from the Activists for Change opposition movement in Uganda and Dr George Ayittey from Ghana/Washington DC. The audience was made up of journalists, lecturers and students, social media folks and civil society. I’d guess a third of the participants were women and the group included both youth and so-called matured people.

The discussion was almost from the get-go heated and somewhat unfocused – issues discussed included the usefulness of “black Africa” as a term, democratic struggle in Africa in the 1960s, Democracy as a process, Uganda’s opposition movement including their initiative Walk to Work, ANC turning 100, the definition of spring, the definition of Africa, the impact of structural adjustment programs, teh role of Africa’s middle class in politics and much more. Clearly, this is an engaging topic.

I was hoping to say something about the last issue, but friends Njoki E Wamai and Nana Darkoa Sekyiamah said what I wanted to say in fewer words…If to raise any critique against BBC’s format, it was maybe that few female voices were heard.

At the end of the show, we in the audience were asked if the debate had made us change our position. I raised my hand then, because I was touched by Anne Mugisha’s stories from Uganda and felt I know so very little about what is going on in neighboring African countries, maybe a spring of sorts is indeed needed there?

Do tune in to The Africa Debate today, 27th January at 19h GMT on BBC Africa.

Long Answer: I have always been a very careful person. I do not climb trees, I watch my step, I avoid scary places and movies. So when it comes to the issue of revolution, because that is what the implied-to-in-this-heading-Arab-spring was, I feel we should thread with care. Maybe this is why I, a foreigner in Ghana now on my fifth year in the country, merge so well with the Ghanaian population. My feeling is that Ghanaians are also careful, balanced and not in a hurry to start any revolution any time soon. Revolutions are risky. Upheaval of central state structures causes major confusion and sometimes violence.

My reasons for being cautious is probably some mixture of nature and nurture that you have to ask my parents about, but Ghana’s, I think, is due to these three reasons.

Contrary to the North African and Arab countries, in Ghana, there is an opportunity to speak freely. Freedom house deems Ghana “free”. This is a chief requirement for any democracy. As an example, Transparency International /Ghana Integrity Initiative’s Vitus Azeem can ask the President to justify the dismissal of the Attorney General. The other day we became aware Anas Aremeyaw Anas can expose a state company’s corrupt practices. We cannot control what happens next, but being able to ask the question without repercussions is vital.

A side effect to free speech is that anger rarely builds up. Face it, a revolution takes a lot of energy, and that energy is many times fueled by anger.

BBC in their write up on the topic suggests:

Today, ordinary citizens are demanding more of their governments than they have ever done before – and they are refusing to accept any form of mediocrity.

I disagree. In Ghana, despite the ever-present question “what will the government do about this?” , Ghanaians do not expect much from the state. Much like in the rest of the West African region, amenities like water, electricity, infrastructure as well as social deliverables such as some level of health care, education and security, we do not expect the state to provide, but rather help ourselves.

We buy our own water, we sit in the dark with battery driven lamps, we fill the pot holes on the road. We hope to work where we get private health insurance, we send our children to private school and build fences around our houses. Some even hire a guard.

I think for the oil producing, actually quite rich country of Nigeria, the one thing Nigerians expected from their government was fuel subsidies needed to run their generators,  for transport and for running most businesses when electricity on the grid, like the rest of the world enjoys, is a dream. When that was taken away, there was a protest. Yes, I know they said they protested against corruption too, but really that is nothing new and it had not made them take to the streets in numbers before.

However, the influence of religion in Ghana – and possibly in other West African states – seem to further cool sentiments and depoliticize human existence. (Yes, I am thinking very much in the wakes of Marx here). It seems the Ghanaian road to change will not be led by the church.

To conclude my argument, see this Tweet (now when I know how to re-post them, I can’t help myself) for instance.

An “Occupy” movement in Ghana – Osu is an area in central Accra – is laughable. “Enye easy” or “it isn’t easy” is exclaimed, much like it is used in daily speech – as to say “life in Ghana is not always easy, but let’s not hinge on that. Let’s cool down, let’s be careful, let’s meet the change slowly”.

BBC launches its new program The Africa Debate with a, thats right, debate in Accra “Is an African Spring Necessary?” on Friday 27 January 2012.

Introducing The Flint and its Initiator: Emmanuel Quartey

In the BBC production An African Journey with Jonathan Dimbleby, the story about Africans returning back to their continent is unveiled, according to a recent BBC article.

This Africans returning home business is nothing new, but I think the story needs to be told many times to counteract the strong emigration narrative “everybody is leaving for the UK/US…”.

Personally, I like the more modern approach to migration, suggesting you can stay both here and there, creating the true cosmopolitan or should I say AFROPOLITAN citizen. Here a short excerpt about Ghanaian fashion designer Kofi Ansah I think says exactly that:

Mr Ansah still travels the world, and could live anywhere, but his business is growing, his family are settled and he feels like he’s making a difference in Accra. “I came to help try to develop the clothing textile industry. And I thought, if we could do it right, it could help our employment situation.

Unfortunately, the program (first episode covering Mali, Ghana and Nigeria) is not available to watch here in Ghana, but maybe our brothers and sisters will watch it in the UK and tell us about it…