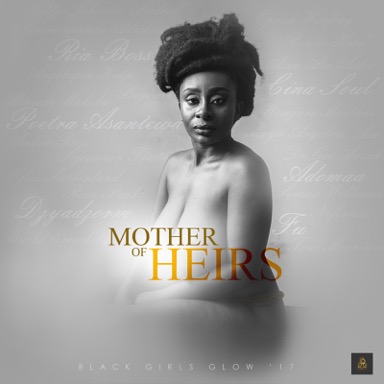 ..the album is finally out! If you want to listen to contemporary Ghana, tune into this beautiful collaboration between Ghanaian artists Poetra Asantewa and Dzyadzorm featuring fellow creatives Adomaa, Ria Boss, Cina Soul and Fu under the name Black Girls Glow. 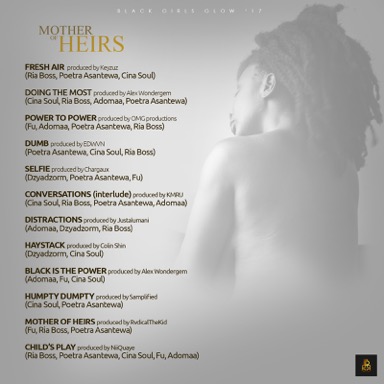 From the first time I heard of this creative collaboration and its lineup, I have been excited. These artists are fab on their own, but often when women collaborate, the sky is the limit! However, the world we live in; patriarchal and commercial structures, make it more common that women compete.  “BGG is a concept that aims to raise the profile of female artists locally, regionally and globally by highlighting and showcasing the brilliant and talented young female artists making waves in the Ghanaian entertainment industry. Black Girls Glow is based on the notion that musical collaboration is a uniquely powerful way to connect people across political and cultural barriers.”, says one of the two initiators, Poetra Asantewa. It is powerful! These Ghanaian creatives are connecting, and it is an immediate creative win.

It is a playful album and even has a track called “Child’s Play” that is like a medley of songs and rhymes we sing to children and concludes with childhood ending? My favorite song is the passionate defense for the selfie: “it is the house you go braless in”, “selfie taking is reclaiming the value of self-love”… The album is a bit cryptically called Mother of Heirs, perhaps the Black Girls Glow collective is envisioning the woman that ought to be respected? The mightly mother of our future children? The track “Mother of Heirs” charges “step aside for the mother of heirs” over suggestive beats, and in sarcastic verses, “silly girl”, “little girl” and “pretty girl” are contrasted with this mother. But could we not also respect the silly, pretty girl for her playfulness, her humanity? Can we women not self-love before we realize we might (also) be the mother of heirs?

The sound is rich, the content critical (and often funny), and I want to sing along, I want to dance! Today I am all about Black Girls Glow!

You can listen to the full album here:  https://soundcloud.com/blackgirlsglow
Sharing is caring!

Obtaining a Visa in the Era of “Beyond Aid”