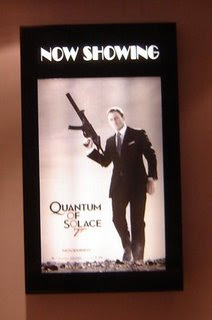 This weekend, I had the pleasure of visiting the newly opened Silverbird Cinemas in Accra. I am not the biggest fan of watching films in company of strangers, so bloggers Abena, Maya and Que beat me to it. However, not even having the option to go, makes the cinema love grow…For the longest time – probably since early 1990s when TV-sets and videotapes came to Ghana in bulk – Ghana’s capital Accra has been without a cinema. Ok, there are the dubious “video houses” where you rent a film that comes with a private room for you and your company. The one I went to last year had a sofa bed with a rubber cover, hm, wonder what goes on in there…

However, that is now in the past and Accra has now its own five screen cinema, located in the Accra Mall, a shopping complex put together by Broll Management of South Africa, according to afridigital.net. There is popcorn scent all around, red cosy chairs, people to sell tickets (GHC 10 each) and others to rip them apart and say, “welcome, there is free seating”. There is Bond and College-films, Indian Golmaal and the occasional comedy.

So now, when the sun is just too much, there is an opportunity to go into the dark, heavily air-conditioned cinema hall and be swept away. My tip is, bring a blanket and someone you can wrap your arm around. It was really very cold in there.

On Becoming an Artist