Summer Internship for a Lecturer: One Week with Citi FM

Tomorrow I start my one-week summer internship with Ghanaian radio station Citi FM. Now you ask yourself: Why would a grown woman with a full-time job do an internship? Just give me a minute and I will tell you!

Back in May when classes were drawing to a close at Ashesi University College where I teach, I thought of what I wanted to do with my summer. As a lecturer who teaches others all year around, I felt inclined to myself learn something new.I do believe in lifelong learning , after all! But what? It was on my mind for a while. I decided it should ideally be something that enhanced my skills in teaching communication, leadership and political science.

Every morning when I drive to work, I tune in to Citi FM and listen to their social commentary morning program Citi Breakfast Show on issues important to Ghanaians such as water, electricity, growing your business and who should be a politician – stuff like that. Every day a new topic, every day a great show. Problem descriptions that showed dedication to journalism, guests with insights, but that were also questioned thoroughly –  and this is not common in an economy where most businesses run on a shoestring (and a generator!) and all of the above takes preparation, skill and time.

I grew curious how they work behind the scenes – how do they prepare? How much time goes into each show? What best practises do they have to share as a successful team? How do they keep their enthusiasm when uncovering so much hardship?

…and now I am to find out! That is if I wake up on time to be there, bright and early at 6 AM.

Stay tuned for my internship report at the end of the week!

Graduation and my CV of Failures

On Air: Kajsa on E-TV

Today at the Data Bootcamp I have learned:

On top of that I have also met some really cool folks – journalists, activists, developers and inbetweens –  and started thinking about two, maybe three apps/websites/data interfaces/crowdsourcing possibilities (ehm, yes as you can hear not exactly crystallized yet!) that can change Ghana!

All in all a great first day! 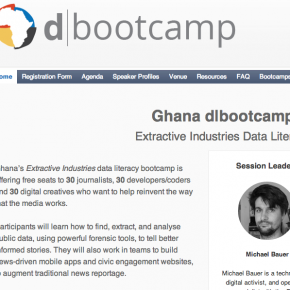 This weekend is Memorial Day (US), Mother’s Day (Sweden, Hurray for mom!) and African Union weekend (Africa). But how does one celebrate the African Union? I am not sure, but will spend the delayed holiday (in Ghana holidays that fall on weekends get “compensated” at the first possible weekday, in this case AU Day fell on Saturday 25 May, hence tomorrow, Monday 27th is the day off!) and two more days at a data bootcamp vamping up my data mining skills, maybe they can be beneficial for the continent?

Normally, I stay away from everything bootcampey as endurance is not my strongest side, I rather like to digest information slowly over time, but I have made this exception as I am very much interested in how data can become news and more people can get access to knowledge. Or is the words of the organizers:

“to boost analytical, evidence-based reportage by giving journalists the digital tools, access to data, and computational skills necessary for transforming the way that newsrooms function.”

We will learn how to “mine” and “scrape” data, how to build apps and websites to visualize the data and how to “pitch” ideas as to get funding. Teachers are a list of interesting people from techie/journalist Justin Arenstein that I have earlier met at a Google event to the Worldbank statistician Lynne Henderson and many more interesting folks.

I am excited about tomorrow and should probably hop to bed. Already, I have some ideas for apps that might not necessarily conform with the “extractive sector” that is a focus of this workshop and a hanging question: where does academia come into all of this?

Behind this data bootcamp is the African Media Initiative, the World Bank Institute, Google Africa and theOpen Institute. Thank you!

Learning A Language with the Help of Your Spouse

Today is aptly a holiday as Labor day this year fell on a Sunday and in Ghana that doesn’t count – a holiday has to come with a weekday off – so here we go. Lazily surfing about on blog Africa Unchained, I came across this interesting article published in The Atlantic about award winning investigative journalist Anas Ameyaw Anas.

Anas was the one to expose the ill-conditions for children at the Osu Childrens’ Home, the bribes at Ghana Customs and some other high profile scandals. The article with the suggestive heading “Smuggler, Forger, Writer, Spy” outlines Anas sometimes risky methods and his background  – he is a lawyer, so draws on his knowledge to produce evidence that will hold in court! It also discusses the problematic aspect of Anas now running a for-profit investigative bureau, Tiger Eye.

Nicholas Schmidle writes in The Atlantic:

The demand for Anas’s services soon outstripped his capacity at the newspaper. Some of the requests he received for investigations didn’t quite qualify as journalism. So last year Anas created a private investigative agency called Tiger Eye. He rents an unmarked space across town on the top floor of a four-story building where a handful of his newspaper’s best reporters work alongside several Tiger Eye employees. It’s difficult to know where one operation ends and the other begins. But they’re all part of Anas’s investigative fiefdom. The work space is divided into two sections: a war room of sorts, with a bank of computers against one wall and a wide table in the middle where the team hammers out strategy; and Anas’s office, decorated with framed awards, oversize checks (including one for $11,700 for Journalist of the Year), and snapshots of himself in disguise. Anas appeared uneasy when I asked him about Tiger Eye, partly because he realizes that its commercial aspect puts him in ethically dangerous territory. Yet it also constitutes a major source of the budget he relies on for long-term newspaper assignments. During the two weeks I spent with him in January, Anas fielded calls from the BBC and 60 Minutes, as well as private security companies, asking if he could conduct investigations for them. All offered generous compensation.

An issue that is not explicitly discussed, but can be read between the lines, is how lonely Anas is at his post.

Do we really just have one investigative journalist in Ghana?

If you have time off this Monday, I recommend you read Schmidle’s well-written article in full!