>Feeling so sad as I read the live reports of the earthquake in Haiti, see for instance the continuously updated BBC report here.

This people that has been through so much, why? Today, I think of my colleague with Haitian roots, my college friend from Haiti and my UN-peacekeeper friend who used to live in Port-au-Prince. I think of their friends and their families.

As I was driving to work this morning, they said on the radio that communication with Haiti has collapsed and it will take time before we know the scale of the disaster. However, at that time, I had already read a number of tweets from Haiti.

If anyone ever doubted that blogging and tweeting could go beyond navel gazing, I guess today we have evidence of the contrary.

Hopefully this access to on the ground information will also make a difference to the Haitian people. 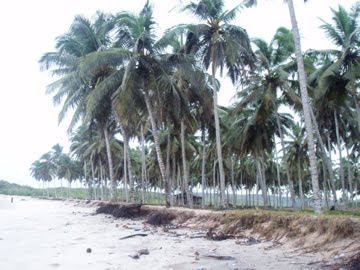 I can proudly announce that our own Ghanablogging member MacJordan landed in Denmark on Sunday to cover the United Nations Climate Change Summit in Copenhagen (COP 15). See his account of his first day at here.

The climate meeting which has been going on for a week and culminates on Friday has already been given a lot of attention in media. We have heard about African countries wanted to be compensated financially, the west roaring back that it was just the corrupt African leaders that wanted cash, then came a leak in some countries pre-writings and then EU announced money will be given…Earlier today, I even heard accounts of “chaos” in the corridors in Copenhagen and arrests of hundreds of protesters…more drama than the average afternoon soap-opera?

Who in the world can we trust to give us the truth?

I know I will turn to my man MacJordan for updates. He will be reporting on his blog and on Global Voices.

Vår
When you suspect there might be onions on your plate....
📸 Playing photo studio with the kids while they are home sick this week (common cold with runny noses and ear pain).