After an initial application, payment to MINT, or Step 1 of the Ghanaian Citizenship process I covered in an earlier post, you get called to submit additional, but mostly overlapping documents to the Ghana Immigration Service located just behind MINT. In my case, the processing took just three weeks, but as I was called only once and not mailed, I only went back to check on my application months later, so here you need to be proactive.

The new docs are:

Next, I will be visited by an immigration officer in my house with my husband to make sure we are truly married and cohabiting.

After that we might be called for an interview to clarify if the visit was not satisfactorily.

Citizenship applications are approved in batches and I was told I just missed one, so waiting for the next.

So far the process has taken me almost a year since I started thinking about it and gathering the documents and since the beginning of June, since I originally submitted my application, that is effectively six months and about five visits to MINT/GIS 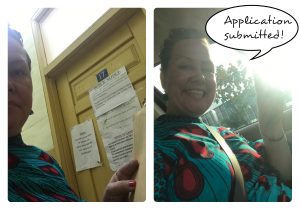