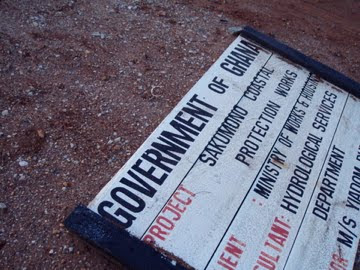 “We want to move the economy forward quickly and we want to try as much as possible to make an impact on the road sector, which includes city, urban and feeder roads,”

was the message from the Finance minister yesterday according to Joy FM, as he announced the government is releasing 160 million Ghana Cedis for projects that were stopped after the 2008 election.

Can I say hurray?

1. Roads for development = yes, thats the analysis! (when will power and water be on the list, by the way?)
2. At the time, I supported freezing funds as there were transparency issues for some contracts, but as time went along…and business life in Ghana almost came to a complete stop I ehhr…changed my mind.
3. Hopefully, this action will have a trickle down effect (although it is a long way from 25 big companies and the Kofi and Ama on the street)and might turn the Ghanaian economy around.

Or what do you say, am I being way too optimistic now?

Pic: A collapsed sign from an totally unrelated project.