Mahama’s Biography: My First Coup D’Etat or the Lost Decades of Africa 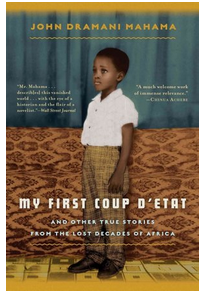 Ghana’s president John Dramani Mahama is the first Ghanaian president to be born in Ghana – his predecessors were all born in the colony of Gold Coast. This fact was many times commented on in the 2012 elections and maybe it was an advantage to his main opponent who, 20 years his elder, belonged to the group born in the Gold Coast. What makes Ghana’s current president even more unique is he is the only Ghanaian President to have written an autobiography before entering the office.

I read it last year as prep for my election involvement. I was surprised at how well the book worked as literature. I was surprised to understand that Mahama who has an air about him to be “an ordinary man”, in fact is a descendant of kings on both sides of his family.

I felt the book expertly walks us through how someone finds themselves politically, discovers their ideology and therefore I decided to use it as a required reading for my Social Theory class. Reading a book with a group of 120 others, makes it even more come alive and also other qualities are discovered.

For instance, many of the students liked how he wrote about music and what it meant to him as a young man. Others found side stories interesting such as how he dealt with bully Ezra, the friendship with his teacher and his strange welcome into the Soviet Union as formative moments, possibly shaping his political thoughts.

There were also some surprising voids, for instance his romantic relationships were reduced to a cute story about a young Mahama falling in love with a 12 year old neighbor. What about his wife Lordina and possibly other women? What his personal relationship to Flight lieutenant Rawlings, now an elder in Mahama’s party, who led the nation in difficult years of starvation and lack of freedoms in the beginning of the 1980s and Mahama’s father was forced to leave the country?

Reviews have over all been positive. See for instance the extensive review in WSJ:

Mr. Mahama is at his best in describing this vanished world. He does so with the eye of a historian and the flair of a novelist. “My First Coup d’Etat” is a collection of personal reminiscences centered on the traditional customs of his home village, where every older man is respectfully called a grandfather and every woman a grandmother.

There is some ambiguity in Mahama’s (the author’s) life as described in the book. On one hand his home was better than the average Ghanaian – thus, one could – in the context of Ghana – say that he was a privileged child, regardless of the ups and downs that came with it. However, his individual life – isolated from that of the family, was average.

In this video, J. D. Mahama reads from the book.

Frankly, I am surprised this book has not been made more readily available in Ghana (for instance through a local publisher) as it is an important, well written book that lets us understand our current president a bit better; where he –  and the country –  is coming from.

My Week: Teach, Do Research and Work-Family Balance?