It is a new year and in Ghana (and very soon in the US) that means a new president! Nana Akufo-Addo, 72 years, was sworn in last weekend and the major event featured one positive media storm concerning President Akufo-Addo’s attire, and one negative concerning the heavy use of unreferenced material in key sections of the speech.

So let me move on to the positives…I was completely in awe of the President’s bespoke Kente/Adinkra/Gonja cloth. It was colourful (almost to the point of being psychedelic), regal (Kente is worn like the Greek toga over the shoulder, or perhaps it is the Greek toga that is worn like Kente?), and filled with symbolism. 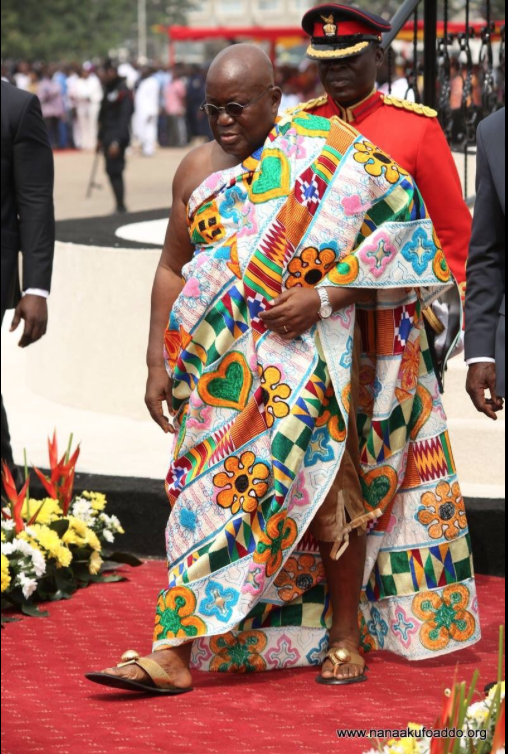 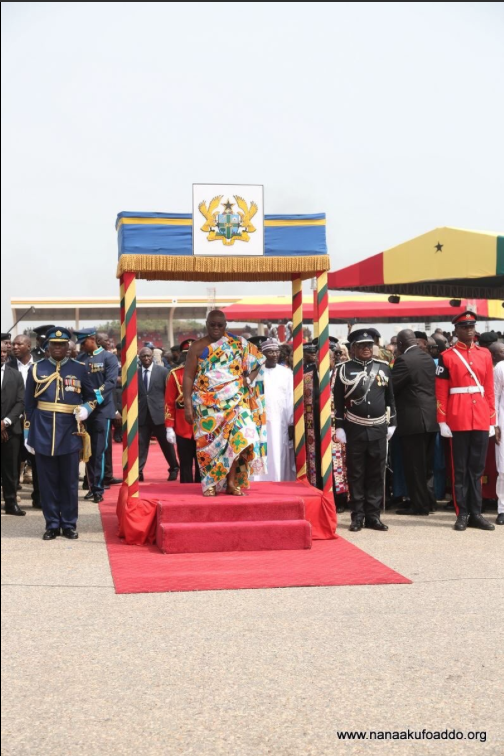 The Kente cloth is traditionally woven is narrow strips later joined together. However here, it was not just Kente in the box of stripes, it was a national blend. Journalist Charles Benoni Okine explained in an article in the Daily Graphic:

“He’s taken the best of the various peoples represented throughout Ghana, and created a beautiful patchwork tapestry reflecting the traditions and the unity of the Ghanaian people. Ashanti kente with proverbs such as “Akokobaatan” – compassion and discipline, and “Nkyimkyim” – life is not a straight path. Obama kente which is derived from the Ga and Ewe people’s Adanudo cloth, and created with embossed and appliquéd patterns. Adinkra symbols, an Akan tradition, such as “Akoma” the heart and a symbol of love, “Bese Saka” a bunch of cola nuts and a symbol of abundance, and “Ohene Aniwa” which is a symbol of vigilance.  There are also pieces of Gonja cloth from the North of Ghana.”

Wasn’t it interesting it included an Ga and Ewe form of Kente known as Obama kente? And that textile from south to north was represented? That adinkra symbols were included with messages for the Ghanaian people?

In an article with more photos by OMGVoice, Twitter sources offered more clues. Apparently this type of joined, adorned, and appliquéd cloth is the highest form of Kente and reserved for kings (and Presidents), it is called Ago.

I wish we could know more, who designed it, who made it, how long time it took. Do let me know if you read it somewhere! Or perhaps the mystique around this centre stage piece of clothing adds that extra flair and elevation to Ghana’s new President? If so, I rest my Kente case.