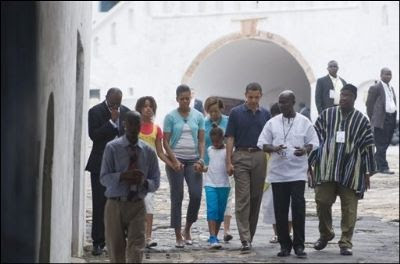 To update you on my three places to spot Obama, this is what happened:

Airforce One came in about three hours after leaving Rome and the G8 meeting, we never knew Europe was so close! I was hanging out with some friends in a bar and when we heard he had landed with Michelle, their daughters and Michelle’s mother (I believe the fact that the whole Obama Family visited Ghana might change the image of Africa in some small way, i.e. Africa is suitable for family vacation) and we headed to the airport area…which was completely closed down. Rumors said they were staying in newest hotel in town Holiday Inn, which was in complete darkness exept for the penthouse…hm.

BINGO! At about 11.20 am the entourage with numerous shining cars in its motorcade swooshed by. My friend and I had been standing in front of the clinic since about 9. Although it was hot, crowded and the opportunity to view the American president very limited it was so worth it when he finally came by and we were in the smiling, waving and roaring crowd.

3. Viewing the speech with AAAG

Due to traffic out of the city we never made it. In stead we listened to the speech with the taxidriver on his radio on a channel that filled every breathing pause of president Obama with a deep voice saying “Peace FM”. Kind of killed the rhetorics.

I am so pleased! Finished my Obama weekend by dancing to MUSIGA’s “After Party”. I hope your Obama-weekend was fine too!