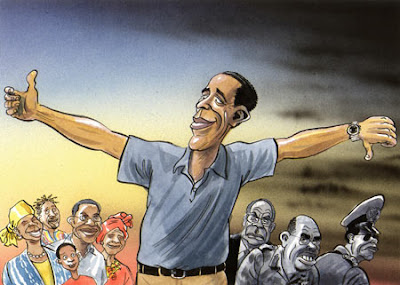 They are probably right in principal: the American policy on Africa might not see too many changes even under Obama’s administration, but clearly no Economist reporter got the on-the-ground energy from Obama’s visit to Ghana – “well received” does not start to cover the euforia!

President Obama made a point to visit Africa within his first year as president and by so doing shared the enormous attention he still carries with the continent. In respectfully and boldly delivering some well-known truths like “development depends on good governance” to an African parliament Obama did something to us living in Africa that cannot be measured in monetary policy.

The “tone shifting a bit” makes the whole difference.

Pic borrowed from the above discussed article in The Economist.