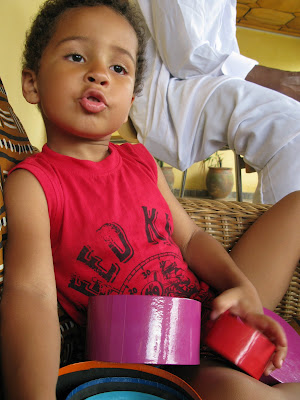 I had wanted to write about how as a process of me learning Twi I have now gotten to the non-verbal sounds used commonly here in Ghana. One sound in particular is very useful.

But how do I describe a sound on my blog? Recording it and posting a sound clip is out, ‘cos I don’t master it quite yet – its really difficult!

But then today, there (facebook) it was: In Writing. Now you might understand what I am talking about:

It seems the sound I was talking about is called “kiss my teeth”: although my Ghanaian husband had not heard that name, but “tsuos” or “tweee” sounds about right. But I think “angry” doesn’t really cover it – its more close to extreme disappointment, grave nonsense and deep mistrust. Effectively used, it can even be a potent insult.

Often used about a (useless) person:
– As for that thief, *tsuos*

Or to correct a child:
– Did I not tell you to stop doing that five times already? Hm, *tweeeeee*

Or to stress an (upsetting) occurrence, as the Facebooker in question describes:
– they dont give plastic bags in that shop, nonsense i forced her to give it to me KMT

In the pic, my young friend is attempting the sound. – What? I have to stop playing with my toys and go shower? KMT!

Update:
According to comments on this post this is not an African sound per se, but also common in the West Indies, South America etc. I was also informed that Guyana Gyal posted on the same topic years ago here, she also added a useful manual on how to do it!

To suck you teeth, you got to pout you lips in a li’l pout, clench you top and bottom teeth close, close. Push the tip o’ you tongue against you teeth. Suck in air. Stchuuuuu….when you want to finish close you lips…uuup.