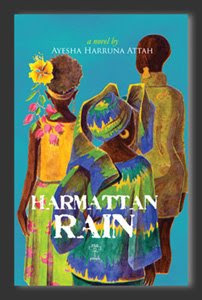 Yesterday, I found some information on facebook about a book by a Ghanaian writer, Ayesha Harruna Attah that came out a few months ago. Her book is called Harmattan Rain, an interesting choice of title that suggests conflicts, since harmattan is the dry season which normally no not include any rains. You can read an exerpt at the Publish Your Story blog (that amongst others feature Ghanablogging‘s own Maameous among their friends) here.

I take a great interest in Ghanaian and West African literature, simply because I want to learn about life in Ghana – and what better way to learn than from books?

About the book from the author herself:

A few years before Ghana’s independence, Lizzie-Achiaa’s lover disappears. Intent on finding him, she runs away from home. Akua Afriyie, Lizzie-Achiaa’s first daughter, strikes out on her own as a single parent in a country rocked by successive coups. Her daughter Sugri grows up overprotected. She leaves home for university in New York, where she learns that sometimes one can have too much freedom. Eventually, the secrets parents keep from their children catch up with them.

What was especially fascinating about this book, if I got it crrectly, was that it was concieved at an African literature center, where a few talanted students are invited each year for a nine month (!) sejour that – if all works out – ends with a book. The center is called Per Ankh as situated in Dakar, Senegal.

There is so much talent in Africa that go unharvested. I think initiatives like Per Ankh could be one way of changing that. What do you think?

Cover pic borrowed from the author.

>On being a good elder