>View out of Ghana: Fotball 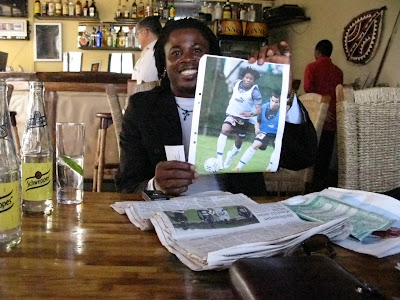 Ghana is the golden country of football. On every small patch of land there is a game coming on in the early mornings and weekends. The European leagues and African derby’s are followed closely on TV. African Cup of Nations hosted by Ghana earlier this year let to even more fotball fever. Fotball is fun. Fotball is entertainment. Fotball is also a possible way out of poverty.

He is a compact, well-built 22 year old I met in front of the Danish embassy earlier this year. Since a young age, growing up in poor circumstances, this young man just knew he was going to be a professional footballer. He was good, he trained a lot and really enjoyed his play. However, his father would not hear of it, but instead wanted his son to work long hours to make money for the family. He moved away from home in his early teens, forced to support himself to be able to continue developing as a footballer.

His talent shone through and soon a prominent Ghanaian football club signed him on for their junior team. They made sure he was put though football academy to further develop his skills with the leather ball. Then last summer, a Swedish coach came to Ghana to look for young talents. His eye fell on my friend and in September he was flown to Sweden to do try outs. Back in Ghana, he was approached by an agent and currently also teams in other parts of the world is showing an interest for the young footballer, a striker who can shoot with either foot. Now he is up in the air, will any of these teams sign him on?

Smiling, he tells me this story over a chilled bottle of Soda water in a nice bar in central Accra. I laugh admiringly and can’t help but ask, but how could you possibly know you would make it?

His eyes grow dark, his jaw tightens.
-I just knew it, I know I am good.

The Ghanaian Dream has been lived by my friend Daniel. His amazing story has all the ingredients of a good tale, except for that the happy ending is – how can I put it – pending.

In the pic, Daniel is showing me pictures and newspaper clippings from his fotball career so far.