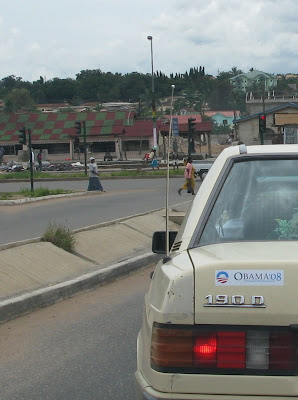 “Have you seen the debate?”

In Ghana, the campaign is on. I heard from a friend you can’t buy billboard space in this country until after elections. But what election are we talking about again?

The debate in question was not between Akufo-Addo and Mills but instead between McCain and Obama. Discussions on the upcoming American presidential election is as vibrant here as the domestic. Of course the American election affects the entire world and I am positive that Obama with his Kenyan heritage is creating a buzz in all of Africa, therefore also in Ghana. Another explanation is that Ghana has it’s eye to the world to a much larger extent than other nation states, say France or the US. We learn about all news from the outside world. And debate it too.

But back to the elections. I have seen street vendors selling a (pirated?) copy of Obama’s biography, at a function last week a young man was sporting a T-shirt with this text “Obama is my homeboy” and yesterday when going to work, this driver showed her support for Obama (see pic).

What election are we talking about again?