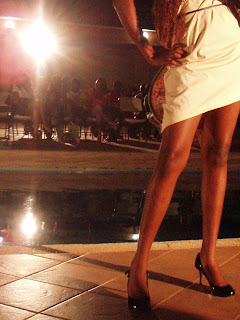 Just to make it very clear from the outset, this post does not allude to the fact that I have recently purchased season 3 of the California TV series “Desperate Housewives” from a guy outside Koala Supermarket, but rather it is pointing to difficulties of relationships.

As a newlywed twentysomething expat, I have started to see disturbing trends among my friends in similar life situations here in Accra. Wasn’t this time – after long years in the University library, impossible loves and zero money, but before kids and a daily routines so boring and wellknown we could also do them backwards – wasn’t it supposed to be the time of our lives?

Obviously not. When two minds come to live under the same roof there seems to be more than a little adjustment to be done.

Some replay the same fights over and over again with their spouses (money, you-said-I-said, cleaning and laundry etc.). Some like to spend at least one night a week by themselves while I at times recent my husband for often coming home late from work. Others again can’t seem to unite about how to furnish their home or if to watch Champions’ League or Strictly Come Dancing (or instead make an early night).

Then we have all the cultural shocks: husbands who want their clothes ironed, you to attend funerals of people you have never met, or eat a bowl of fufu for dinner – every day! They are matched with wives who want to pay half the bill, feel odd about having to instruct a housegirl instead of starting a laundry cycle in the machine or spend a average Ghanaian monthly wage on foreign groceries each week!

Additionally, it can be noted that Ghanaian men seem to have little interest in taking out any parental leave (ok, there is no parental leave for men in Ghana, but at least my Swedish side feels that this somehow should be at the very least a priority for timing of the yearly leave). They also seem to be weary about parttaking in the birthing of a child with half their genes.

Some of us young spouses talk vividly about how important it is to work, not predominantly to make money, but to aviod becoming just a housewife – implying that our identities could be gone in no time. However, I don’t think that is the problem. Our personalities, I think, are going nowhere. The problem is rather to be able to hold your tounge the hundredeth time you make a small sacrifice for the person you love knowing he is doing the same.