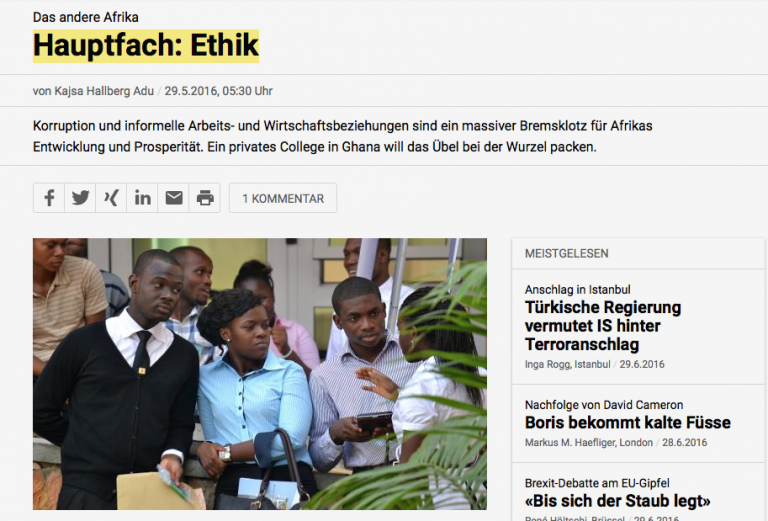 Earlier in the spring, I was asked to write about Ashesi University for a Swiss newspaper, NZZ. Under the theme “The Other Africa”, I wrote about teaching ethics in Ghana illustrated by my own experiences and that of students and an alumn.

My Ashesi article under the headline “Hauptfach: Ethik von Kajsa Hallberg Adu” was recently published in the newspaper in a special issue on Africa in the excellent company of write-ups by Ghanaian-Afropolitan novelist Taiye Selasi, correspondent extraordinaire Alex Perry, and an article on smartphones in Africa by literary scholar Mohomodou Houssouba.

Find an English version of my article below:

On the red, dusty road an hour from Ghana’s bustling capital of Accra, children play and goats scoff around for something to eat. I drive through the village; expertly avoiding the potholes, pass the police barrier, the water well, and the primary school before I make a sharp turn to climb the lush, green hill. Up there, I wave a greeting to the woman selling pineapples before I pull into the 100-acre well-manicured campus. I teach at a non-religious, private liberal arts college called Ashesi University College, located in the town of Berekuso in Ghana’s Eastern region. I work in an institution that has the, perhaps lofty, mission of educating a new generation of ethical and entrepreneurial leaders in Africa.

Ashesi, as it is called for short, means “beginning” in local language Twi and is known for pushing the bar of private higher education in Africa, especially in terms of ethics and liberal arts. Perhaps others might also know of Ashesi as its founder and president is a very hands-on and influential leader. Dr. Patrick Awuah has been on the management listings of the world like Forbes 2015 World’s 50 Best Leaders, Fast Company where he was listed as number 87 of 100 Most Creative in Business 2010, and last year Dr. Awuah received the MacArthur “Genius Grant”. He can often be seen in the campus cafeteria having lunch with students and colleagues. In my view, Ashesi ought to be more known for is its recent pledge to run an engineering program for 50/50 men and women, something many top universities across the globe have not been able to do.

Since I was first introduced to the liberal arts institution in a 2007 TED video with Dr. Awuah and subsequently started to work there in 2009, much has happened in terms of growth and reach, but the focus on ethics, entrepreneurship, and leadership remains. The university college has doubled in size to 600 students of which 47% are women, 53% men. Ashesi has grown to have four undergraduate programs: engineering, business administration, management information systems, and computer science. While a majority of students come from Ghana, the institution aims to be pan-African with 21% of students from outside the country. The decision to make admissions gender-balanced was a pioneering move that impacts daily life at the university and underlines that women and men have an equal role to play in problem solving on all levels.

Africa is still the continent with the lowest level of university enrollment, at about 6% of the population compared to a 26% world average, according to UNESCO. What this means is that extremely few Africans ever get a chance to go to university. And those who do are destined to become leaders in society. With this analysis Ashesi University College has aimed to bring scholarships to deserving students, quality education to those who can afford, and making sure the future leaders of the continent are both ethical and entrepreneurial. But educating ethical leaders in a corrupt environment marred with inequality is a challenge. Ghana and its neighbors repeatedly scores high in corruption listings such as Afrobarometer or Transparency International’s Corruption Perception Index and a recent particularly shocking corruption scandal exposed judges in Ghana’s legal system accepting cash bribes to skew verdicts. Related is the hierarchal structure of the society that will make many visitors raise an eyebrow at Dr. Awuah’s presence in the cafeteria queue. At other Ghanaian universities, the leadership would go to lunch in separate senior clubs with air conditioning, service at the table, and not feeling they missed out at all from not talking to students.

In this context, it makes sense that Ashesi’s approach to teaching ethics is hydra headed and importantly stretches over the four years of the undergraduate program. In essence the Ashesi way teaches you to see yourself as the beginning of an ethical society. Second-year student Sihle Magagula summarizes the method as “continuous reflection on your actions and their outcome”. In the freshman year, ethics is taught in a course called Giving Voice to Values, developed by business lecturer Dr. Mary Gentile of American liberal arts institution Babson College. This curriculum is very practical as it assumes we all know what is wrong from right and focuses on giving tools for speaking up. Local examples include values conflicts where your supportive uncle both gives you a job and asks you do act unethically. There are also ethics components in other Ashesi courses, from Design to Communication, and in the four-year leadership seminar. For instance, in designing a solution it is ethical to involve the beneficiaries of your solution on all levels of development. In ethical communication, giving credit to your sources is key. In the final year leadership seminar, which aims to develop students’ social consciousness, students do service learning in the community. Student Mawuli Adjei says of the experience that “this might seem obvious, but directly interacting with a problem’s stakeholders rather than just reading about them compels me to empathize and personalize the problems that I am solving”. Hence, ethics at Ashesi ultimately about being more than a shiny ivory tower: we see ourselves as a part of the town of Berekuso and some collaborative efforts include a football field, a literacy program for adults, and adding value to the most common cash crop in the area, the pineapple. All these programs are student-led.

Another aspect of Ashesi’s ethics instruction is the Ashesi Honor Code that allows students to take exams without proctoring. The Honor Code is signed on by one year-group at a time after extensive deliberation and agreeing by voting. The model has received keen interest from the surrounding society. In 2009, the National Accreditation Board threatened to stop Ashesi’s operations over the Honor Code, but was persuaded by letters from students, parents, faculty and staff of the benefits of practicing ethics in university through unproctored exams. Recently the Honor Code system has been piloted at another university in Ghana and adopted at lower level schools.

Alumnus Anna Amegatcher of Ashesi’s class of 2014 now works as a market researcher and business analyst in Accra. She agrees ethics was part of every course at Ashesi: “It is not necessarily explicitly said, but from day one ethics like the honor code or ethics like when we came to Berekuso having shared kitchens, ethics was always sounding. I think at a point it was sounding more with students than even with the administration, which was good. It became a part of the student body. The message was there.” The kitchen comment relates to trusting others to not steal your foodstuffs. However, a recent series of thefts on campus – of electronic devices and other items – has startled the university and seen us take steps to reinforce the practice of ethics. How can we make sure our campus is inclusive? How can we make sure ethics is lived and not just spoken? The sense of urgency around these efforts shows the Ashesi level of engagement with ethics is a visible, constant struggle, and an ongoing conversation.

In her office in Accra, alumnus Anna Amegatcher suggests her ethics training is central to her carrying out her job: “It has just kept me conscious. It has become a part of me, like issues of ethics is a part of me. You just can’t take it out of me. Fortunately, it had been nurtured in me even before Ashesi, but I got to appreciate an organization was valuing it as something core to them.”

The goal of educating ethical entrepreneurial leaders in Africa might seem lofty, but is there really any other way? Having taught at Ashesi University College for six years has been personally challenging in many ways, not least because of a commute on an unfinished road winding through the Ghanaian countryside, as well as mitigating Ashesi’s high ethical standards in a surrounding society that might not always appreciate you speaking up. But there is the rewarding side as well. I work with young people who are excited to learn and take on challenges. Additionally, I have been privileged to see our alumni little by little effect change in Ghana and beyond. Importantly, Ashesi also pushes the envelope by introducing a “new normal” or new benchmarks for businesses and universities in the region, the continent, and the world.