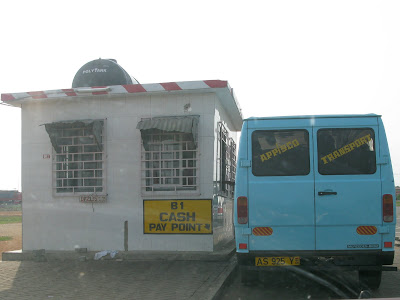 The increase in road tolls in Ghana takes effect today.

Since I moved to Ghana three years ago, there has not been any increase in tolls, so I guess it was long overdue. The amount can of course be discussed. At present, maintenance is minimal on motorways and highways. This means street lights rarely work, potholes sometimes resemble craters and abandoned broken-down vehicles can be found anywhere, yes even on the fast lane of the motorway! It seems clear money is needed to make roads in Ghana safer.

However, as the toll increase was published in the newspapers last week, no reason was given for it, no promises were made, no connections were made with above stated problems. We were just informed through newspaper ads that “The Ghana Road Fund under the auspices of Ministry of Roads and Highways…solicits the cooperation of Motorists to comply with payment of the new tolls at the various toll collection facilities”. Information was published in newspapers, but for a 1000% increase, is that enough? I was surprised that there was little discussion about it.

Because even though, something clearly needs to be done about Ghana’s roads, the effects of this increase in tolls become almost like a tax on commuting. With a congested capitol, maybe that is not the best measure… For me who commute to Accra using the Tema motorway my monthly costs is up by 18 GHC or a little less in USD. That’s in a country where average monthly salary is about 160 GHC per month (1326 USD per year in 2007 according to Gapminder).

Just now, Joy FM is reporting that some people are refusing to pay and there is chaos at the toll booths at Tema motorway.

Hence, short term, this toll has made it more difficult to get to work. Still, I’m cautiously hopeful about the long-term improvements.

Pic: A trotro pays its tolls at the Ashaiman/Tema toll station last week, most likely happily unaware of the changes of today.

Inflation: the word on Sarkodie’s lips ( and everybody else’s)