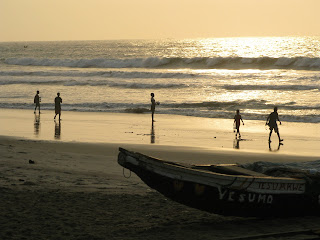 I was just reading one of my favorite columnists in Sweden, Bengt Ohlsson. He starts as he often does, to comment on some quite ridiculous trait of the Swedes (this time the extreme dependency on the mobile phone). But then he surprisingly continues with a story about Ghana. He writes:

I thought I knew what powerlessness was, that was before I stood on a gravel covered Medborgarplats in the February darkness and my ex-wife called and said that she had spoken to our son and that she thought he had caught malaria.
It turned out he hadn’t. It didn’t matter. Since he was in Ghana I wouldn’t even have had a theoretical possibility to rush aboard a plane and go there, since Ghana demands Visa and things and Yellow Fever and don’t even have an embassy in Sweden.

Wait now. Malaria rarely kills, especially not people with funds to get treatment. But yeah, I also freaked out when my siblings caught malaria in Ghana last year. We rushed them to hospital and in just 24 hours they were feeling better. However many Ghanaians cannot afford treatment as highlighted by Swedish Medecins Sans Frontiers in their malaria campaign here.

And not even a theoretical possibility to go? What about the daily flights from Copenhagen, London and Amsterdam? Visa on arrival? Calling the Ghanaian Embassy in Denmark to help out? What about just emailing me or any other Swede in Ghana and ask us to check on your son?

I get the column was about how little you can do on the other end of a satellite phone call, but judgements like these without any facts supporting them do little for building on a truthful image of Africa. In 2006, 8565 Scandinavians ( and about half a million international tourists in total) came to Ghana and many more are discovering Ghana every year and I am pretty sure most of them survived (the only reason I am not saying all is due to dangerous traffic).

Those kids on the beach on the pic above are the ones who risk their life when contracting malaria.