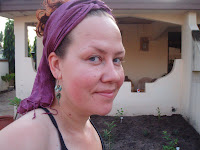 Yesterday, Ghana Telecom came to install broadband here in my house. The whole thing was quite simple since a phoneline had been installed last week. The process was tidious though since it started in the beginning of december, but I shouldn’t complain…because now I felt so utterly good!

I couldn’t really put words to why I felt so glad, until my friend A said that with the broadband, it was like I now have a real home here in Ghana. Obviously for us twenty-somethings Internet=home. And that is exactly it! It’s homey to be able to read Dagens Nyheter or The Economist for breakfast, to check in with my bank from home and update my facebook status with stuff like “having tea and checking emails at home”. Not to mention writing this from my dinner table listening to some muzac instead from a sweaty Internet cafe.

The cost for installing Internet here is about USD 100 and then there’s a monthly fee of USD 60 for a 256 kbps speed broadband. This is equal to what many people here take home as their monthly wage. I know a guy who makes USD 80 a month for working six days a week in a supermarket, for instance. Internet access more than anything highlights the gaps between people. And countries.

Four years ago Sweden had 756 Internet users per 1000 inhabitants (isn’t that something!) compared to Ghana’s 17 per 1000, calculated with the help of gapminder. According to the OECD which continously compare global communication prices Sweden had the cheapest broadband in 2006. Later this year the same organization is hosting a meeting on the Future of the Internet Economy. When talking about development, many hope that Africa will skip the step of laying cables and go straight for the wireless, and hence maybe become a player in the future OECD has in mind. However as of now, the guy in the supermarket can barely afford going to a cafe for Internet and even rich expats like myself can’t afford wireless Internet.

Ghana BlogCamp 2012 : Photos from the event