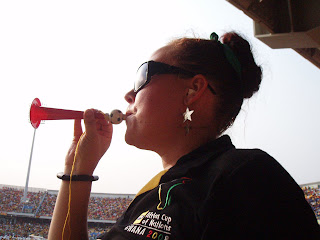 Africa Cup of Nations 2008 is now filling the minds, streets and stadiums of Ghana. Allegedly more Ghanaian flags are flying around town than when Ghana celebrated 50 years of independence last year. I have discussed the reason for this with some friends, and the analysis seems quite clear – independence was political – the ruling party NPP were criticized for spending too much on the festivities, hence any opposer probably was inclined to not join the celebrations last year.

Fotball, on the other hand is “non-political”, and as a consequence everybody can join. The Ghanaian red-yellow-green flag with a black star can it attached to cars or t-shirts, scarfs or hats and even full outfits. An example to illustrate the extent of the fotball craze: yesterday at driving school half of the class including the instructors had CAN 2008 t-shirts on! It is quite nice to be a part of a massmovement, but sometimes it also goes too far..many schools and universities have postponed their going back after xmas to mid february when the cup is over…

Anyway, I was lucky to be able to cheer the Ghanaian national team, the Black Stars, to victory at the opening match at the Accra stadium. What a party!

>View out of Ghana: Poverty