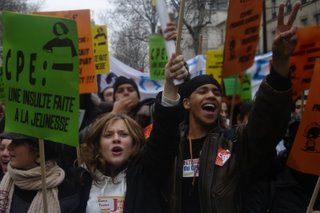 Political activism is on the streets of France again. The French are known for publically expressing their opinions and this time it is the CPE law which allows for employers to hire young people (under 26) without employment security to set in which is the reason for upset.

Since Thursday most of the universities in Paris have been captured and demonstrating students and others, sometimes wild ones, have been protesting against the CPE-law. Police have been numerous and working hard to put an end to demonstrations with teargas and other tough and violent methods. On Thursday 120 000 students protested peacefully in Paris , however in the end of the day the protests became violent with rockthrowing and firebombs.

Still, while universities are closing down, a bookstore was burning, thousends of people were coming together to defend labor rights it was fairly easy to miss that there is a small revolution going on in Paris, since I don’t have a TV or radio. I only realised how big this was today when I spoke to a friend who live near Sorbonne and she told me about the demonstrations. She also said was accused of “tourisme revolutionaire” when she took a photo of the demonstrations there. So tomorrow when new demostrations are scheduled all over town maybe I will leave my camera at home when I experience the demonstrations… The chant for the 13.00 demonstrations at Pere Lachaise will be “Ne laissons pas faire!” – We won’t let them do it! according to IndymediaParis. LeMonde has made a good audio/visual presentation of Thursday’s demonstrations here.

It is an important question, labor rights for all, and BBC comments that ironically it is the generation of the ’68 barricades that now cannot promise their children the same rights they themselves fought for and enjoyed.