While games are ongoing in Brazil and the very popular Ghanaian team, the Black Stars, are still in the game playing Portugal later today…they seem to lose the news cycle game every day to the Ghanaian president, John Dramani Mahama. 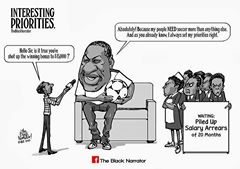 The top issues have been so far:

1. Electricity and the World Cup.

What happened: For some time now, Ghana’s power supply has been erratic. Since mid-May, the country has experienced scheduled breaks in supply. Just before the world cup, the government came out to say electricity supply will be enough for all during the World Cup.

Public verdict: I haven’t seen one single positive comment to this intervention. Although Ghanaians LOVE soccer, it seems the public opinion would prefer electricity during working hours to be able to be productive…

2. Can you insult your president?

What happened:  Before the Germany game, the president Tweeted that he had talked to the players and encouraged them that they could take on the German team. The issue quickly became politicized and many wrote angry comments to the post.

Public verdict: Here my social media friends seemed to be split between those who thought the president have more important things to do than talk strategy with fotball players and those who found the intervention worthwhile. Many however stressed that a president is president for the nation and should not be insulted.

What happened: The Black Stars had been promised an appearance fee that did not come and the team expressed disappointment. Next we knew, a plane left Ghana with the appearance fee of USD 75000 for each player – (“incredibly”, says the Guardian) in cash.

Public verdict: Questions galore! Why should the team hold a poor country to ransom? How could the government prioritize this, when key functions in the country are down? (fuel crisis and owing money to school feeding programs, health professionals etc.) Why was the money sent in a plane with cash and not wired into accounts? Many were also embarrassed to see international media discuss the issue.

It seems politics and fotball intersect once again! To discuss these issues and others surrounding the World Cup, BloggingGhana’s project InformGhana will be running a Twitter discussion today between 1-3 PM Ghana time.