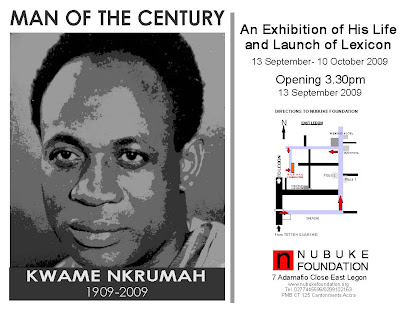 There have been complaints about that Ghana has not managed to plan the centennial of Kwame Nkrumah’s birth very successfully. See for instance popular journalist Ato Kwamina Dadzie discuss it here.

It might be true, but let me in the interest in what actually has been planned not go into it further, but instead kick off the KWAME NKRUMAH WEEK with the following Nkrumah celebratory events.

1. Sunday 13th September (today!), Nubuke Foundation opens its photo exhibit of Kwmae Nkrumah’s life. In addition to the enlarged photos, a document called a “lexicon” will be presented chronicling Nkrumah’s life and deeds. Time: 3.30PM. The exhibit can be viewed until 10th of October. (see picture)

2. Monday-Tuesday 14-15th September, The Dubois Center in collaboration with some other groups organize a symposium. Monday it will be situated at University of Ghana, Tuesday at the center in Labone, Accra. Time: 9AM-5 PM both days.

Hope to see you at some of these events!