>If She Could Blog: Yaa Asantewaa 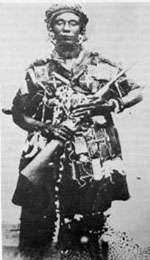 Since Prempeh and Ejisuhene, my own son, were sent away I have found some power within me I didn’t know I possessed. I miss them and I fear what the white men might do to our people, now that they are gone. My life has changed.

I have taken my son’s seat in the council and yesterday I had to sit and endure the speech of our white enemies. Hearing the British Governor demand, DEMAND, the Golden Stool made my vision get blurred with emotion. At the secret meeting, just after the ugly, lanky Governor had left, when I saw these old men sit and argue – as if we had all the time in the world – my anger just bubbled over.

When I stood up to deliver my speech, I saw surprise in some of their faces, but also respect. I am Queen Mother of Ejisu Yaa Asantewaa, and the future of our Asante Confederation now rests on me. My voice was strong when I spoke at the meeting:

Now I see that some of you fear to go forward to fight for our king. If it were in the brave days of Osei Tutu, Okomfo Anokye, and Opoku Ware, chiefs would not sit down to see their king to be taken away without firing a shot. No European could have dared speak to chiefs of Asante in the way the governor spoke to you this morning. Is it true that the bravery of Asante is no more? I cannot believe it. It cannot be! I must say this: if you, the men of Asante, will not go forward, then we will. We, the women, will. I shall call upon my fellow women. We will fight the white men. We will fight till the last of us falls in the battlefields.

After I had spoken it was like the quarrels had died down. The room was quiet. Apart from my auntie smiling at me from a corner, everyone else had a very serious expression on their face. The silence continued and wasn’t broken until my carriers had taken me out of the council room and into the family palace. As I heard their angry voices, I thought of that I had meant every word; if I have to I will lead the Asante people to war. As a royal, this is my responsibility.

Let’s see if any of these fearful chiefs will come and visit me, else it will be Yaa Asantewaa’s war.

(In the picture, I am wearing my warrior outfit and carrying my rifle, I hope some of the damn British will see it and realize the Asante Confederation must still be feared!)

This post is a joint effort with bloggers from ghanablogging.com. We decided to this month blog from the perspective of a (famous) historical person who might have been a blogger had he or she lived today. The quote is an authentical quote from Yaa Asantewaa who lived 1860-1921 and led her people to war in 1900. She died in exile in the Seychelles.

A Good 24 hrs : Tortoise, Hairy Legs, and a Video on Pulse