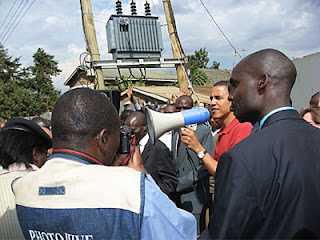 Sorry for my absence here on the blog. It’s been a busy week. Anyways, no one (hopefully) hold any grudges today, not towards a lazy blogger nor towards a fellow human with a different opinion, today, the feeling is united.

America has elected a person bigger than a national politician for their next president. Barack Obama is the first African-American to be elected president of the United States, but he is so much more. A politician who speaks about hope in a way that tears people’s eyes and about change that people can believe in. It’s been a long time since politicians were met with such massive cheer, almost religious devotion anywhere in the world.

For me personally, I am of course happy a man with Caucasian and African parents (just like my future children) can become president of the world’s super power. However, I believe the aspect of bringing politics “back on track”, suggesting a politician is a role model and an inspiration is even more important.

In Africa as a whole the hopes for Obama’s presidency is high. South Africa’s President Kgalema Motlanthe said in a statement:

“Your election to this high office of the American people carries with it hope for millions of your country men and women as much as it is for millions of people of particularly of the African descent both in the continent of Africa as well as those in the diaspora.”

Here in Ghana, the election has been the big topic for discussion of the week and several “Obama parties” were organized yesterday night (I sadly fell asleep on my couch). One more is due tonight at the Accra night club The Office. Most my Facebook friends had written something on the election as their “status”. In the office this morning we talked about the election with smiling faces.

I believe my husband summarized the joyous feeling well as he was getting ready to go to work this morning:

Pic from Chicago Sun and Obama’s trip to Kenya in 2006.