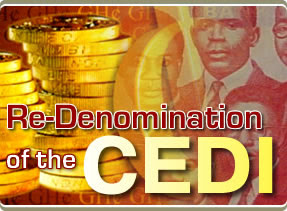 The value of the Ghanaian currency the Cedi (pronounced like “CD”) is as of now about USD 1 to 10 000 cedis. This means that if I go to change 100 dollar, I will get about 1 000 000 cedis, and voila, I’m a millionaire! That’s the nice part. However, when the biggest note is the yellowish 20 000 cedi note, it means that even if it is nice to be a millionaire is is extremely impractical. Buying groceries for 200 000, means counting (at least) ten notes. Or when changing money I cannot double check I have the right amount, because I don’t have time to count hundreds of notes! Since the coins in use are only worth a pittance, even the smallest purchase involve notes, which has made the notes wear out. Buying things becomes a hassle, since you have to carry big stacks of money. I couldn’t imagine buying a car, for instance!

Due to an instable economy, the cedi has been inflated over the years. I estimate the value of it to have almost halved since I last was in Ghana 2,5 years ago (based on a beer-taxi homemade index 🙂 and today everything you buy, more or less is ‘thousend something.

Therefore it is welcomed that on Sunday, 1st of July the currency in Ghana will undergo a redomination. 10 000 cedis will next week be 1 Ghana cedi, or 100 pesewas. A huge campaign attached to it is aired on radio and TV with a really happy high-life tune in which they sing “the value is the same”. In a country where still a big chunk of the population do not know how to read or write, explaining that is not easy. Probably the reason for knocking 4 zeros off, and not what seems easier to me – take out three, is that it is nice to have a currency that is equal to or even worth more than the US dollar. Regardless, the campaign has been well received, and “the value is the same” is a slogan that is now used jokingly in almost every situation (“But that is not your lunchbox!”, “Nah, but the value is the same”.)

Bank of Ghana launched the new currency at a press conference some time ago which show similarities to the old one, for instance “the big six” or the Ghanaian freedom-fighters from independence in 1957 are portrayed on all the bills. On the other sides there are famous buildings like the University of Ghana and the Bank of Ghana. Only the 50 Ghana pesewas coin shows a woman. Then it is not a named historic person, but an unknown trades-woman.

Because of the depreciation of the cedi, I have come to see “money burning in the pocket” with my own eyes… it is a common thing to have a heat rash on the thigh/butt from carrying a heap of money in your pocket not allowing air to pass through…But, after this week, and the 6 month period in which both currencies can be used, my time as a millionaire, with rashes, is over.

>Xmas on the beach

>View out of Ghana: Poverty