>Yesterday was my birthday and I didn’t want to spend it alone, so I invited the students who live down my hall for a small party in my room. Also, I invited some people I met at a friends apartment on Saturday…some of the people I have gotten to know here at Cité Universitaire and Kerstin that I met on the plane from Stockholm to Paris. They all came! And many of them brought a friend, in the end about 50 people attended my “fête”! I was exstatic and the party was still going on when I went to bed around 2 am.

Here are some pics. 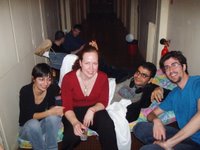 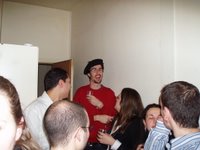 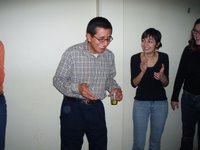 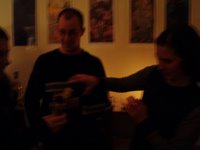 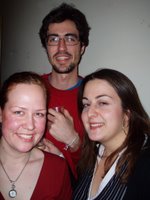 And I have to tell you about an interesting birthday happening. For lunch on my birthday, I attended a meeting with an adjoining lunch at the Swedish embassy in Paris. I was seated next to a man who cheerfully said as I introduced myself “Oh, Kajsa, that is my wife’s name!”. Minutes later he told me that he almost didn’t make it to the program, because…today was his wife’s birthday! Of course Kajsa and I were introduced and after having eyed eachother in silence, the other birthday-girl-Kajsa exclaimed: “This is an amazing coincidence, I will have to write about it in my diary!”. For you who know me well, you can see how I had to utter “Me too!” for the second time that lunch.

Thank you to all of you who called/sent emails/sms!