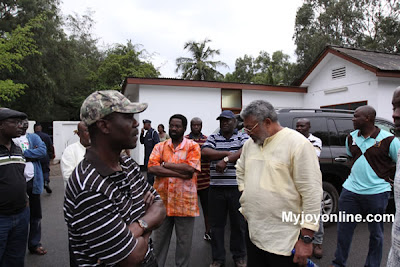 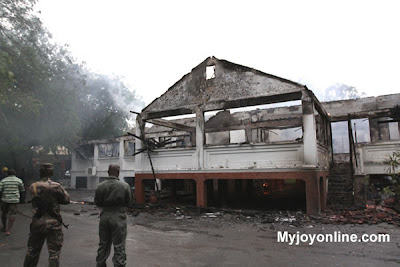 The shocking news reached us yesterday morning, the former president J.J. Rawlings’ residence in Ridge was on fire.

– Nobody was hurt
– Only Mrs. Konadu Rawlings and one of their daughters were at home
– The ex-president was not at home, but came to the sight early in the morning
– The fire started at 4 am
– By 9.30 am the house was completely burned down
– Three months ago, an electrical fire almost broke out in the residence
– The house was a colonial style bungalow, in much constructed in wood

Immediately a debate broke out on electrical fires caused by the common fluctuations of power in Ghana. The night before the fire, it was raining heavily and a substation broke down in Tema. However, GRIDCO, the distribution company found that such a discussion was premature before a proper investigation had been carried out, see here.

However, even if it was an electrical fire, what will we take from it? Has anything changed at all since Ghana’s Foreign Ministry burned down in October caused by an electrical fault?

As I heard the rain coming down heavily that night, I woke up and as I anticipated power to fluctuate I anxiously went to pull the plug on all computer equipment (beacuse yes, I am a computer nerd). Then I went back to sleep.

Next time, I’m not so sure I’ll be able to go back to sleep.

Have You Heard of Nigeria’s Oil Leakages?